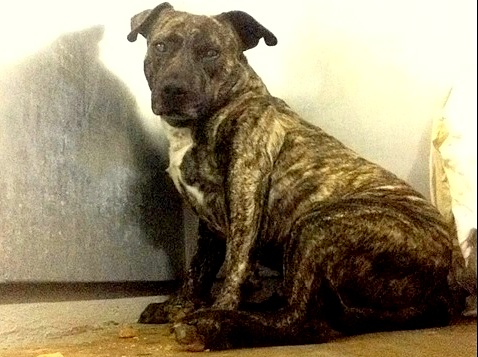 Wylie Boy spent most of his life – five years – living on the streets.  The petrified dog was taken in by animal control and shuffled around before being given up on – he was heartworm positive and had no idea how to interact with people.  One man – John Miller – knew there was hope.  Wylie’s transformation is amazing, but now there is a legal battle to keep him from becoming part of a hoarder’s collection.

From The House of Zen Wellness Sanctuary & Rescue, a “free-roaming, no kill, wellness sanctuary and rescue” in northern Texas:

Wylie Boy, we believe, is an American Pit Bull Terrier dog that has lived on the streets of Wylie for most of his life. He was discovered during the winter of 2012, by the founder of the House of Zen Animal Wellness Sanctuary & Rescue. From that moment she (and 3 other ladies), kept him feed, created shelter (a make shift box at first, to a donated igloo doghouse; until that got stolen) and kept him from becoming truly feral. 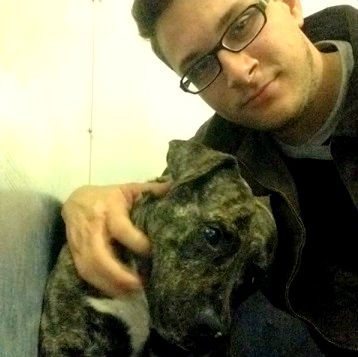 On January 16, 2014 the city shelter trapped and caught Wylie Boy. He was kept in isolation for 2 weeks where he made no progress. Concerned for his safety after showing no signs of adoptability, the House of Zen hired (through donations) a rehabilitator. On January 28th, after assessing Wylie Boy, John [Miller] agreed to work with him. The city shelter agreed to keep him off the euthanasia list and allow John to come in 2x a day, which he began the next day.

On February 3rd, per John’s recommendation, Wylie Boy was taken to be vaccinated and neutered. After testing positive for heartworms, the city shelter decided to delay the vetting. This decision was made based on misleading information that a 501c3 rescue group was interested in taking Wylie Boy in and that they had “a $1,000 donation made for this animal’s care.”

On February 4th, with the blessing of the city shelter, John accompanied Wylie Boy (and 2 other puppies that were also pulled) to the 501c3 rescue. However, on his way there, it became clear that he was not helping transport Wylie Boy to a 501c3 rescue (which is REQUIRED by the city shelter for any rescues pulling animals). Instead, he was headed to a woman’s house who runs a non profit (non 501c3) rescue group. 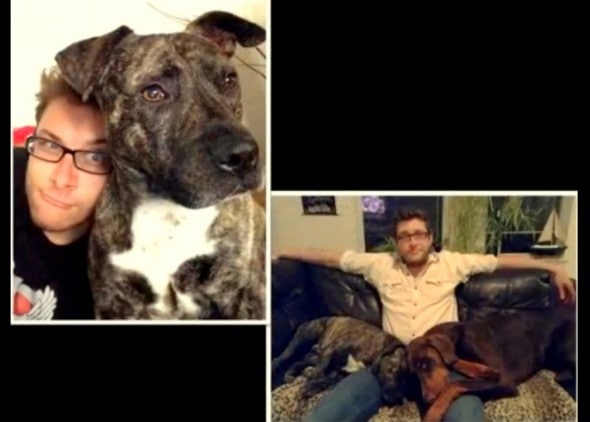 While the puppies were left in her car, Wylie Boy and John were invited in to see her house. There, John saw over 30 dogs, some free roaming and jumping all over him, many others in crates. The guest bedroom had crates stacked upon crates creating a small walkway into the room. A pig was kept in a closet, too small for the pig to move around and a kitten was kept in a tub. John was unprepared for what he saw. The woman also indicated that she works 4 days a week, leaving the dogs in crates, with no socialization, for over 13 hours on those days.

John left her house with arrangements to continue to work with Wylie Boy. She agreed to let him come to her house when she wasn’t home, offering to get him a spare key, and on the days she worked, she would drop Wylie Boy off to him. As John left her house, he immediately contacted the city shelter and Chief of Police. It would be days before he heard back from them, and even more before they would go out and check her facility. By the time they went out, she had cleared her house.

In the meantime, Wylie Boy was taken to be vaccinated and neutered on February 5th and John was due to go see him on February 7th but received a text that the woman was changing her mind about him coming back to the house. She agreed to drop him off to him February 10th, which she did. 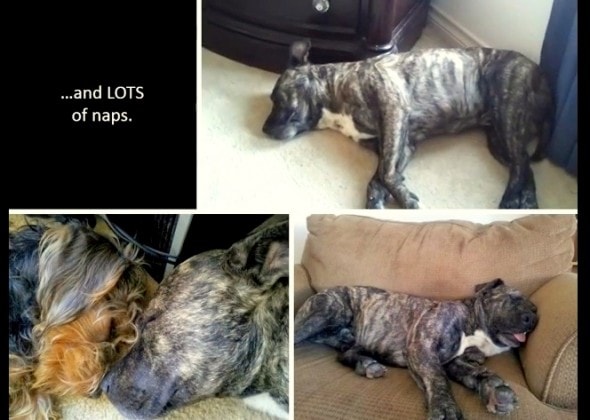 After finding out that the 501c3 organization that pulled Wylie Boy from the shelter was in fact a vet clinic, that state on their website that they are NOT a rescue and do NOT take in animals, and having seen the place where Wylie Boy was being kept, John upheld his obligation to Wylie Boy and refused to give him back.

It has been approximately 11 weeks since then. During this time, John continued to rehabilitate Wylie Boy, as well as get him on a slow kill protocol for heartworms. Wylie Boy is now a happy, more balanced dog that comes to John when called, plays with other dogs, greets strangers at the door and readily accepts affection.

During this time, John contacted authorities and animal advocate groups for help, to no avail. Several weeks ago, the woman who unethically obtained Wylie Boy, falsely charged him with theft. Just recently a warrant was issued for his arrest and John turned himself in to start the court process. 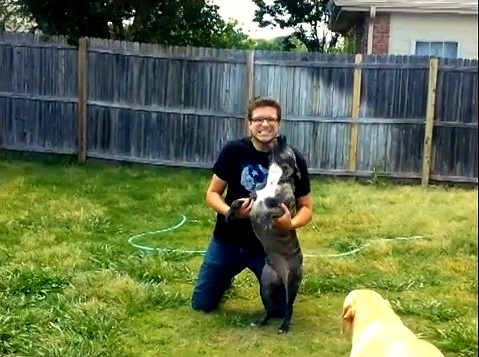 If Wylie Boy goes back to the woman that claims she wants the best for him, and is filing this theft charge, he will go back to living in a crate with little room to move about, 4 days a week, over 13 hours a day amongst other crated dogs. This is no life and will certainly set back the amazing progress he’s made.

Now John needs our help. In order to fight this, John has obtained a lawyer and needs to raise $1500 for his legal fees. The stakes are high, as Wylie Boy’s fate is in the hands of the justice system. Please share his story and help us save John. By saving John you will be saving Wylie Boy and will be giving Wylie Boy the life he so deserves, after having been through so much.

To donate to John and Wylie Boy, please click here.