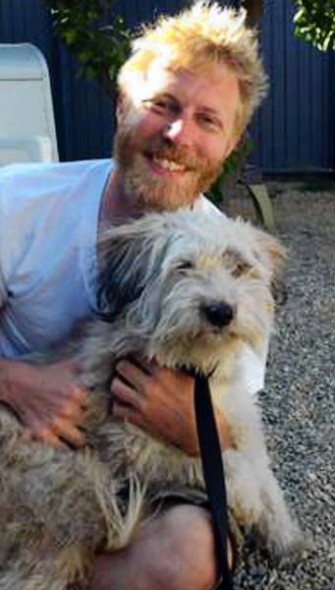 Every pet owner worries that something will happen to their beloved while they are on vacation.  Alex Berg was away visiting family in Connecticut when he got the news that his precious dog Tesla was missing back home in L.A.  He was thousands of miles away and desperate, so he leapt to action to try and save Tesla.

Berg emailed and called friends back home, begging for help to find his fluffy white poodle mix.  He posted pictures on Facebook and Twitter, pleading for help.  And he he did get help; by the time he got back home more than 100 people were looking for Tesla.  People Berg had never met were coming together, sending messages, tweeting, searching the streets in the hopes of finding the lost dog.

One group of people called themselves the “dawn guard” and patrolled the streets in the early morning.  “I’ve got a dog back in Chicago, and I know how it would feel if she was lost,” said John Roiniotis, 29, a background investigator who lives in the Miracle Mile area.  Roiniotis spent several days driving around looking for Tesla;  a computer was set up so that Tesla-related tweets could be plotted and organized; and a Google map was created, so volunteers searching for the dog wouldn’t overlap.

Several other lost dogs were inadvertently found during the search and reunited with grateful owners.  “It’s nice to know that even though you’re across the country and probably leading very different lives … one thing we can all relate to is the love of our pets,” said  Mandy Marxen, who lives in North Carolina but followed the search on Twitter.

The efforts finally did lead to finding Tesla as well, but it was too late.   He was found dead, late last Friday.  But what his disappearance inspired is not lost on those who were involved.  Tamar Stevens, an actress who joined the search said “It doesn’t just feel like Alex’s dog, it feels like our dog.”  She and some friends will plant a tree in Tesla’s memory.  Drew DiFonzo Marks, a friend of Berg, said “It’s so sad, but the effect of it is so heartwarming, Tesla kind of becomes a symbol for something better now.”  Tesla brought people together in a beautiful display of humanity and compassion, which hopefully will continue to inspire.