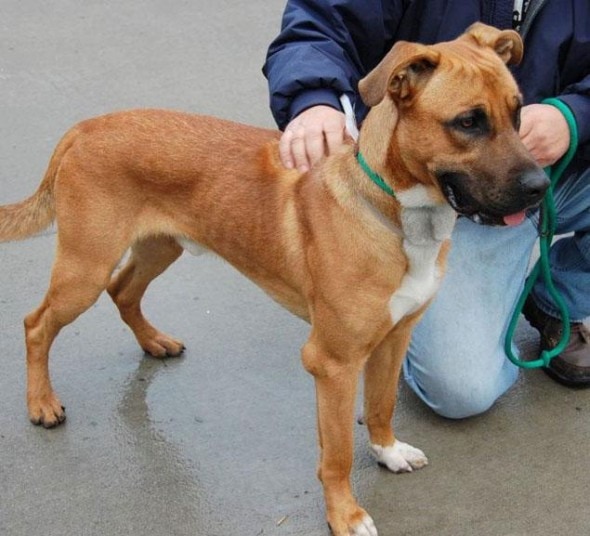 Buster, a Ridgeback-shepherd mix, went missing from his home in New York City weeks after Hurricane Sandy Hit. For weeks his family searched for him. On December 12th Buster was hours away from being euthanized at Animal Care and Control when a family friend spotted his picture of Facebook.

In mid-November construction workers were assessing the damage from Hurricane Sandy in Buster’s neighborhood of Belle Harbor, Queens. Buster’s owner, Christine O’Donovan, wasn’t home at the time, but when workers arrived to assess her damaged home they spooked Buster and he escaped from his home.

The O’Donovan family desperately searched for their dog. Christine had originally rescued Buster last June when he was found abandoned and tied to a pole. The family was determined to get him back. Even after they were forced to move to temporary housing in another area they continued to search. O’Donovan called Animal Care and Control, but unfortunately they had Buster listed as a pit bull mix. After weeks O’Donovan wasn’t sure she’d ever find him, “But I was still hoping someone found him and that he was in a good home.”

On December 12th Kim Fraser, a friend of O’Donovan, was on the Facebook page Urgent Part 2, a nonprofit that advocates for “Death Row Dogs”, when she saw Buster’s face. Buster had been at the shelter for 8 days and was scheduled to be put down the next morning. Fraser desperately tried to get in contact with O’Donovan. Finally late at night she was able to reach her. “I knew it was him immediately,” said O’Donovan. “I broke down in tears because I didn’t know what to do at that point.”

The Animal Control and Care shelter was closed but O’Donovan was able to put Buster on hold through their online system. O’Donovan didn’t sleep all night not knowing whether her online request had gone through. First thing in the morning she and her five children arrived at the shelter to find Buster still alive. “He was jumping around and happy,” O’Donovan said. “As soon as I saw him I started to cry.”

Buster’s wasn’t the only lie saved that day. While reuniting with Buster O’Donovan spotted a puppy pit bull mix named Nicko. She couldn’t bear to leave him behind and brought him home. Nicko is available for permanent adoption through Fraser’s rescue group Sasha’s Mission.