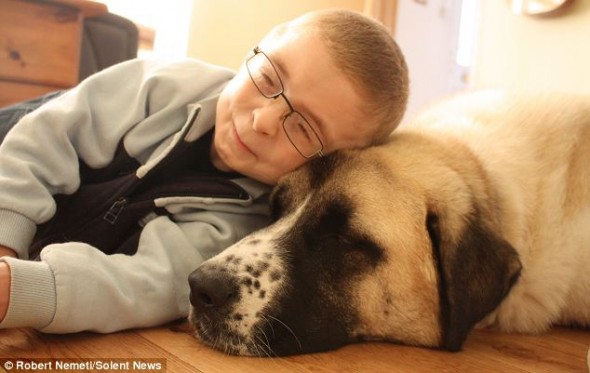 It’s a heartwarming story about 2 special beings overcoming incredible adversity very early in life.   Owen is a 7 year old boy suffers from a rare condition called Schwartz-Jampel syndrome, which means his muscles are always tense.  His awareness that he is “different” began when he was quite young, but intensified when he started school, and he became very fearful and anxious about going outside.  Haatchi, a 15 month old  Anatolian shepherd dog, who was tied near a train track at ten months old and abandoned.  He lost his leg and tail when he was hit by a train and lay suffering for days before he was rescued.

Now these 2 are bringing joy to each others lives, almost giving each other a new lease on life.  Owen’s dad, Will Howkins, and his fiancee Colleen Drummond adopted Haatchi after both the RSPCA and UK German Shepherd rescue centre struggled to find him a home.  The result was an immediate bond between Owen and his 3 legged friend.  Now Owen is eager to go outside and take Haatchi for walks and to go to dog shows.

Will, 33, an RAF engineer at RAF Odiham, said: “Owen is incredibly attached to Haatchi – in fact, they are very attached to each other. Haatchi will come and drink out of the bath when I’m bathing Owen, and they don’t like to be apart.” 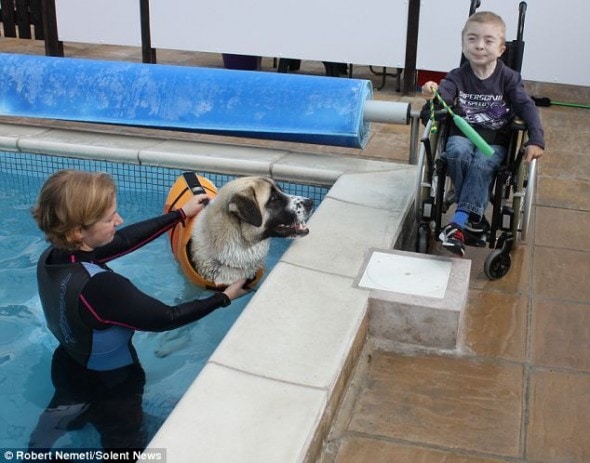 Amazingly, Haatchi recently completed his training as a “Pets as Therapy” dog and he will use his training while visiting soldier amputees injured in Iraq and Afghanistan, as well as sick and terminally-ill children.  He is also being honored next week with a special award by the International Fund for Animal Welfare which will be presented at the Animal Action Awards event at House of Lords next week.  Robbie Marsland, UK Director of IFAW, said: ‘When we heard Haatchi’s amazing story of survival and the very special relationship he has with Owen, we knew he had to be IFAW’s Animal of the Year.’

Owen and Haatchi effectively saved each others lives, and the impact of the bond they share is immeasurable and brings new meaning to the word rescue.