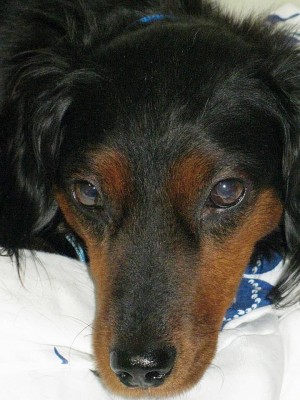 For years, Osawatomie, Kansas residents have seen the stray railroad dog chasing trains.  She was known by everybody – their own little celebrity.

“For some reason, there was one particular railroad truck she’d chase all the time,” animal control officer Ted Bartlett said, laughing.  “We don’t know why she liked that one truck, but she would chase it for a long ways.”

She spent most of her time in the railroad yard, and slept under boxcars.  The railroaders had a special place in their heart for their mascot, and even built her a doghouse.  She had a few litters of puppies, and the workers found homes for all of them.   Community members left food for her.  Through all of this, no one could catch her.

She feared people, and preferred her freedom.  Bartlett worried that she would be hit by a car or a train, and did his best to snare the elusive wild girl.  But he never had any luck, until she trapped herself.

On December 26th, the dog got her head stuck in a trap designed for beavers or foxes.  It tightened around her neck, and by the time Bartlett discovered this, her head was “grossly swollen.”  He managed to tranquilize her, remove the snare, and bring her in to veterinarian Niki Boss.  He didn’t know if the dog would even be able to be tamed, but he asked Boss to spay her anyway.

“At that point, we didn’t know what would happen,” Bartlett said.  “We didn’t know if she would be potentially adoptable, but I took a chance.”

The fortuitous procedure saved the dog future pain and trouble, as it was found that the tranquilizer dart had pierced one of her ovaries.  But what would they find out about her personality once she awoke?

“It was kind of amazing,” Bartlett said.  “We expected her to wake up freaking out, but she showed no signs of aggression.  She’s just untrusting and scared.”

Veterinarian technician Brandi Reynolds was already a friend from afar.  Or rather, nearby, as she lives close to where she had seen the dog sleep for five years.

“I’d see her there all the time, and it just broke my heart,” Reynolds said.  “I’d watch her chase this one railroad truck.  She had these little shortcuts – she chased that one railroad truck, and she’d know where it was going before it got there.”

She knew the dog had a playful nature, but wasn’t sure how she’d react to the change in environment.

“She could have come out growling and snarling,” Reynolds said.  “But she was the sweetest little thing.  She had these big brown eyes, and looked at me like ‘I know I’m afraid.’”

After all the years of being a standoffish loner, she finally warmed up to one person – Reynolds.  She let the vet tech pet and even carry her.

Residents were interested in her story, and are relieved to know there is a happy ending.  On January 14th an anonymous person adopted her.

“She’s been taken to a farm outside town,” Bartlett said.  “They’re going to keep her in a kennel and socialize her to a point where she can run free.”

Though people will surely miss seeing the little dog about town, they are glad she finally has a home.

“There’s just something in Osawatomie that this brought all together a little bit,” Reynolds said.  “There’re so many different people here, so many differences, and this was something we could all relate to – she’s the railroad dog!”