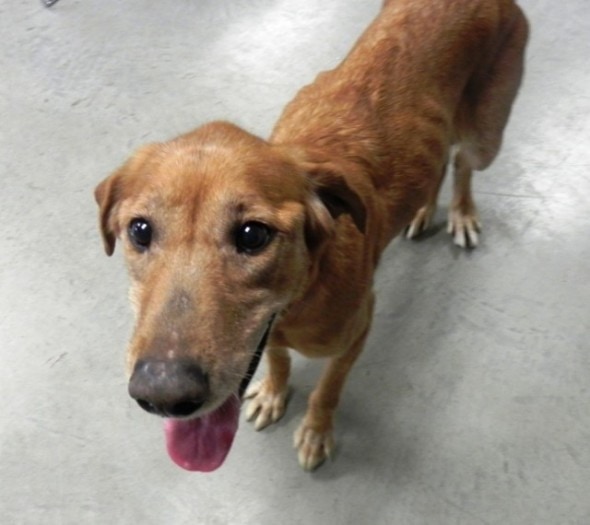 Goldie the golden retriever is recovering from trauma and starvation after spending three weeks in a cage outside in the icy Iowa winter, thanks to the compassion shown by a landlord and the Humane Society.

The neglected dog was one of eight dogs found in a Forest City home whose tenants had been evicted.  The other dogs had already been taken and rehomed, but seven-year-old Goldie remained outside.  Landlord Barry Coppes said she had been abandoned by tenants he called a “motley crew of individuals of varied ages and intellect living in filth.”

Coppes brought her home and tried to nurse the emaciated dog back to health.  He took her to a vet who suggested euthanasia because of the extensive challenges and costs to rehabilitate her, but Coppes wasn’t ready to give up on her.  He left a message at the Humane Society to see what they could do.

In the meantime, he would give Goldie the love and food she so desperately needed.  While he was at work the next day, the traumatized and anxiety-ridden dog ate half of her tail, leaving the bone exposed to infection.  Coppes thought perhaps the veterinarian was right, and he should do what seemed the most benevolent.  As he loaded her into his car, the phone rang. 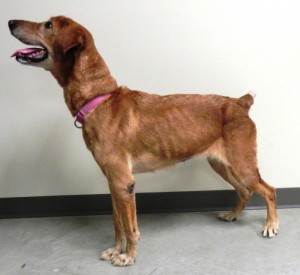 It was the Humane Society, returning Coppes’ call at the eleventh hour.

“She walked in skin and bone, her tail was missing,” Executive Director Sybil Soukup said.  “But she was jumping up and down.  There was still a sparkle in her eye.”

Goldie was 20 pounds underweight, but has been slowly putting some meat back on her bones in the two weeks since she’s been at the Humane Society of North Iowa.

“With a dog that’s suffering starvation and dehydration, you can’t just set a bowl of food and water down in front of them,” said Soukup.  “You have to give them small amounts of water and small amounts of food.  Otherwise it gets them severely sick.”

Goldie is doing well, despite her past.  Her loving and vivacious personality is what allows her to become stronger with each passing day.  She hasn’t shown any signs of aggression, and she loves to play.

“She puts the retriever in the name golden retriever,” Soukup said.  “She certainly is a happy and joyful dog.  She’s got a heart of gold, which matches her name.”

None of Coppes’ former tenants laid claim to the withering dog, so no charges are able to be filed for animal abuse.  But Soukup and other staff members are focused on the bigger picture – covering Goldie’s medical costs and finding her a loving home.