When Idaho police officer David Gomez responded to a call about two vicious dogs running loose, he kept his cool and was able to control the situation because of special training he had received.  Instead of cowardly shooting them, he expertly handled them using those five words that every dog wants to hear.

In 2014, the Meridian Police Department sent two officers, one of whom was Gomez, to the Defensive Tactics Canine Encounters class, where they learned to use confidence and force continuum, a standard for determining how much force is necessary in a situation.

Gomez whistled at and called the dogs over to him in a friendly manner.  They repeatedly approached Gomez aggressively, barking and with teeth bared.  He firmly told them to get back.  When neighbors heard the commotion, he asked them if the dogs were theirs, but when they said no, he cautioned them to stay inside. 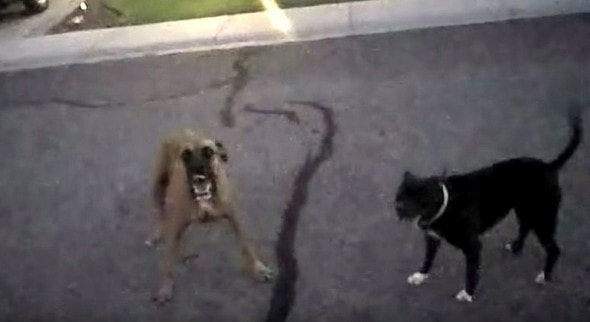 The officer tried to get the pair to sit, but they weren’t interested.  Gomez called in animal control, but still tried to manage the dogs, particularly the boxer, who appeared severely distressed and was foaming at the mouth.  But then the pit bull lunged, and Gomez let him use his baton as a bite stick.

“I have no doubt, if I didn’t have a baton, he would have taken bites,” he told The Dodo.  “As soon as I fended off that, then I was good. I was like, ‘OK, my tricks worked. I have a couple other tools ready to go.’”

When the dog showed no interest in letting up, Gomez felt compelled to use his pepper spray. While unpleasant, Gomez was patient with them, and pepper spray is a much better alternative to a bullet.

“I don’t think I was anywhere close to drawing my weapon,” he said.  “I still have a boot. I have a taser. I still have lots of brainpower to go along with it.” 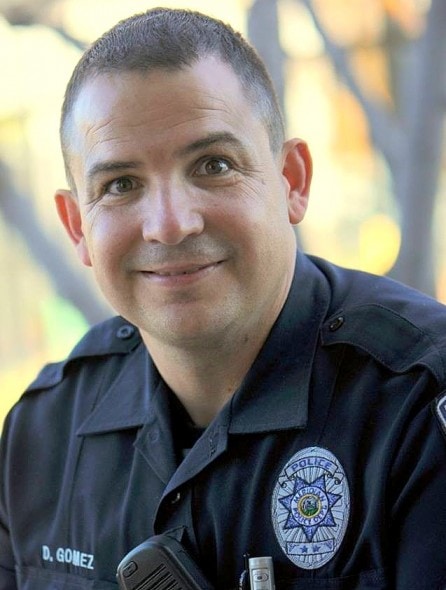 Then he tried a different tactic, and made an offer no dog can refuse:  “Wanna go for a ride??”  He opened the cruiser door and tried to entice them with the prospect of feeling the cool breeze flapping in their jowls.

They were hesitant at first, but once the pit bull hopped in, the boxer followed.  Gomez was greatly relieved.  He remained calm in the face of great danger, staying true to his roots as a dog dad.  He has his own pup, and did what he hopes anyone would do if it was his dog in that situation.

While Officer Gomez is undoubtedly worthy of being lauded as a hero, the Meridian Police Department is also due a commendation for their proactive approach to managing dangerous dogs.  If more police departments handled dogs with such forethought and care, there would be fewer owners mourning the loss of their pets because of bumbling, cowardly cops.