Tail docking and ear cropping are something that humans have done to specific breeds of dogs for years.  Most dog lovers know that the physical damage that these “elective surgeries” at the vets call them can sometimes be very extensive, and often times doing so is not at all necessary.  A recent study has now shown that the damage from this can be more than physical, it can have mental or emotional repercussions as well.

The following article describes the author’s experience with this practice, some research, and some of the possible ramifications of doing this to you dog when it’s not 100% necessary.  To see the original article, click here.

Just when you think you know a thing or two about dogs, there I was in Italy a few weeks ago after the Canine Science Forum, looking at a dog on the street and exclaiming, “Who the heck is that!”

“A Doberman!” offered my good friend and Do You Believe in Dog? colleague, Mia Cobb.

“Really?” I said in disbelief. Because it was true. I’d never seen a dog that looked like that. Every Doberman I’ve seen has looked like this: 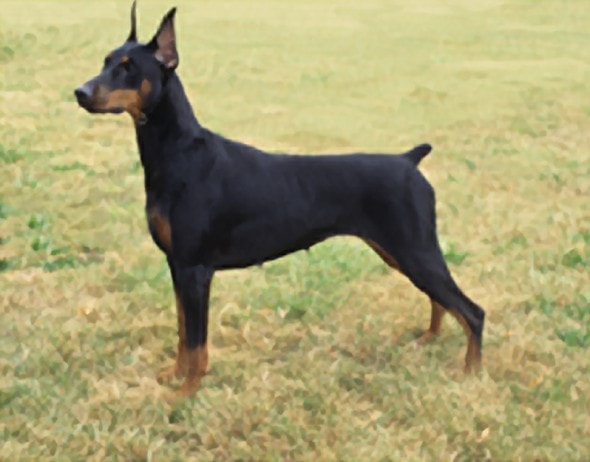 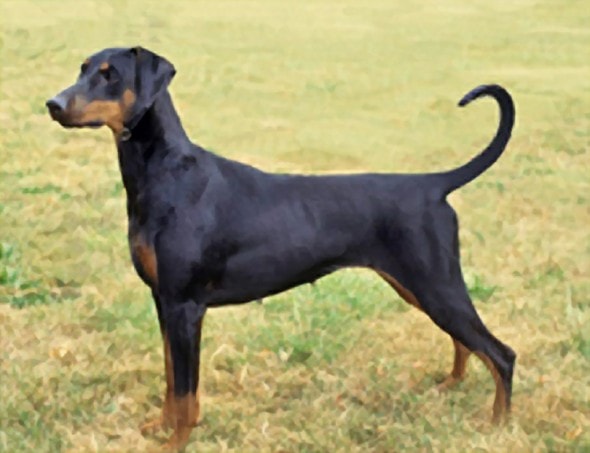 The bottom image, of course, is the Doberman in her natural form. A dog born from two Dobermans will grow up to look like the bottom image. But the Dobermans I’ve seen have had two post-birth surgeries; their tails are shortened or docked, and the floppy part of each ear is cut, followed by the ears being taped to a hard surface forcing them to stand upright in a way they normally would not.

These cosmetic surgeries (also referred to by veterinarians as elective surgeries) are built into breed standards — see an example from the American Kennel Club. Which is to say that a Doberman puppy born from two Doberman parents does not meet his or her own breed standard.

In some countries, dog surgical procedures for cosmetic purposes are restricted or banned, but in others, the practices are rampant. For example, cosmetic tail-docking is banned throughout Australia and in numerous parts of Europe, which is why I saw my first natural Doberman in Italy. In North America, things look a bit different. The American Veterinary Medical Association (AVMA) and the Canadian Veterinary Medical Association (CVMA) oppose these procedures, with the AVMA stating that these procedures “are not medically indicated nor of benefit to the patient,” and “these procedures cause pain and distress, and, as with all surgical procedures, are accompanied by inherent risks of anesthesia, blood loss, and infection.” Even so, restrictions are rare. As of 2014, only two states, Maryland and Pennsylvania, have any restrictions on tail-docking, focusing on the dog’s age at the time of surgery and the use of anesthesia. Only nine states regulate ear cropping.

In addition to welfare concerns associated with docking and cropping, the surgeries could affect dog social communication. Numerous studies find that tails are (gasp) useful and meaningful in dog-dog communication (more formally known as intraspecific communication, or communication between members of the same species). Even Charles Darwin recognized that tail up has a different meaning than tail down, and dogs attend to long tails better than short ones. The side of the body that a tail wags can even be informative to another dog: a dog seen wagging more to his right-side would be perceived more positively than a dog wagging more to his left. A stump is less informative.

The communicative function of dog tails has received oodles of attention (see additional readings at the end of the post), and I’m going to focus on a new issue raised last month by Marina von Keyserlingk and colleagues at the University of British Columbia in Vancouver, Canada. Their open access article in PLoS One finds that these appearance-altering procedures are not meaningless; they affect how dogs are perceived, independent of the dog’s actual behavior or personality.

Study participants, United States residents participating via Amazon’s Mechanical Turk (MTurk), saw images of four dog breeds that commonly have their tails docked and ears cropped: the Doberman Pincher, Miniature Schnauzer, Boxer, and Brussels Griffon. The first three are in the top 20 of registered breeds, and the Brussels Griffon, while not as popular, was selected to include a small breed in the study.

Participants saw two different images of the same dog breed, one in the natural state (long tail and unaltered ears) and one modified (docked tail and cropped ears). They were told that the dogs were siblings and asked to explain why the ears and tails looked different.

Fifty-eight percent of participants correctly identified that “some dog breeds have part of their ears and tails surgically removed after they are born.” Dog owners were more likely to answer correctly than non-owners.

On the other hand, 40% did not know that these dogs are not born with their ears cropped and tails docked. Instead, these participants thought these traits resulted from genetic variation, agreeing with the statement, “individual dogs of the same breed vary in appearance, meaning some will have tails and ears of different shapes and sizes.” Sorry y’all. Not so for the dogs in this study! The tails and ears on the ‘modified’ dog are all us.

But what’s the effect? Another experiment in the study found that these cosmetic surgeries are not meaningless to dogs or people; in fact, these procedures affect how participants perceived dog personality traits. Generally speaking, surgically altered dogs were seen as more aggressive toward people and dogs than natural dogs, and natural dogs were seen as more playful and attractive than their altered counterparts.

But when looking at the four breeds individually, something odd popped out about attractiveness. For the Boxer, Doberman Pinscher, and Miniature Schnauzer, neither the natural or surgically altered dog was considered more attractive. Take the tail off, leave it on, crop those ears, whatever. For those breeds, people were indifferent — one appearance was not viewed as more attractive than the other. Only for the Brussels Griffon was the natural dog considered more attractive than its surgically altered counterpart.

If not all people know that the cropped/docked look is surgically created and don’t find these dogs less attractive than their natural counterparts, what incentive is there to reduce these cosmetic surgeries in the companion dog population? Since 2008, the American Veterinary Medical Association has encouraged “the elimination of ear cropping and tail docking from breed standards.” Who is going to stand with them?