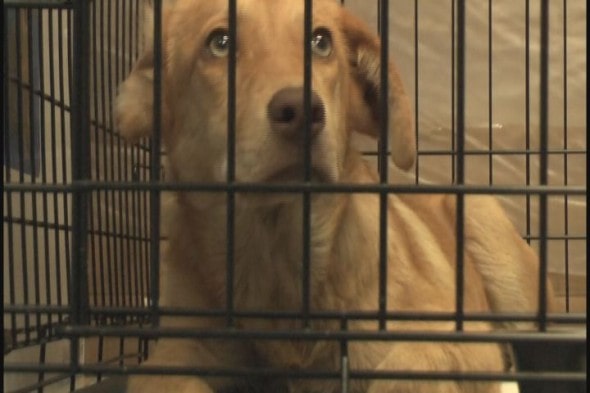 Rescue workers with the Humane Society of the United States (HSUS) removed 65 dogs, many of which in very poor health, from a home in Blue Mountain, Mississippi.  The dogs are undergoing extensive health and wellbeing checks by vets, and are resting comfortably in an undisclosed location for their safety.

The rescue was quite a task, and took the rescue team more than eight hours to complete.  No matter how many times they see this sort of thing, it’s impossible for any of them to get used to.

Jennifer Kulina-Lanese, another rescue worker said, “They had a lack of food, lack of shelter, disgusting water.  There were obvious injuries and illnesses.”

Even though this is something no one ever could or should get “used to seeing,” but at least there’s hope for these dogs.  That’s something that the rescuers need just as much.

“Hope is the only thing that keeps us going,” said Mauceri.  “Knowing that so many people are out there that believe animals deserve justice and deserve to be cared for is comforting.”

For now, there will be in depth vet checks.  The process will take some time to go over, and each and every dog taken off of the property will be checked “from tips of noses, to tips of tails” by doctors to establish any health needs each individual dog has, and address them all.  So far, initial investigations revealed dogs loaded with fleas and ticks, worms and some even had some clear signs of physical abuse and open wounds.

The medical stuff aside, the biggest thing these dogs are receiving is love, care and protection.  Some things that every animal deserves.

“There’s nothing like being part of a rescue like this,” Mauceri said.  “Just looking at their faces at the end makes it all worth it.”