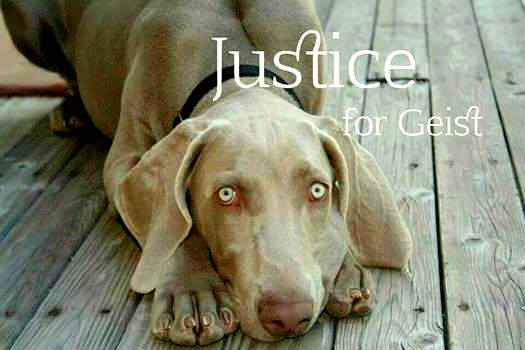 Hundreds of people gathered outside of the Salt Lake City police headquarters on Saturday to protest officer Brett Olsen’s shooting of a Weimaraner that was minding his own business in his own fenced-in yard.  Geist’s owner, Sean Kendall, and the community want justice.

Geist was in his fenced-in yard when officer Olsen burst through the gate in search of a three-year-old boy who had gone missing.  He did not get Kendall’s permission before advancing on the property, and said Geist had approached him in “an aggressive manner.”  (Well no kidding.  You wouldn’t have been illegally and abruptly entering his territory to cause such a behavior, now would you?)

He then shot Geist and left him to die.  Kendall wasn’t home at the time, and learned of the sad news over the phone.

“About 15 minutes ago I got a phone call from Utah Animal Control, calling to tell me that an officer had shot and killed my dog,” Kendall says in a video he recorded on his cell phone.  “He was inside my backyard in a fenced-off area.  What was the cause for the officer to shoot and kill my dog?”

When Kendall gets home, he lays into bumbling police officers.

“What was the probable cause to trespass on private property and shoot my dog?”

“We entered the yard looking for a lost child,” Sergeant Joseph Cyr responds.  He says an officer on the scene “was threatened by the dog and shot the dog…. That’s as simple as it gets.”

“So I get to bury my dog because an officer couldn’t back up and close the f—ing gate,” Kendall fires back. 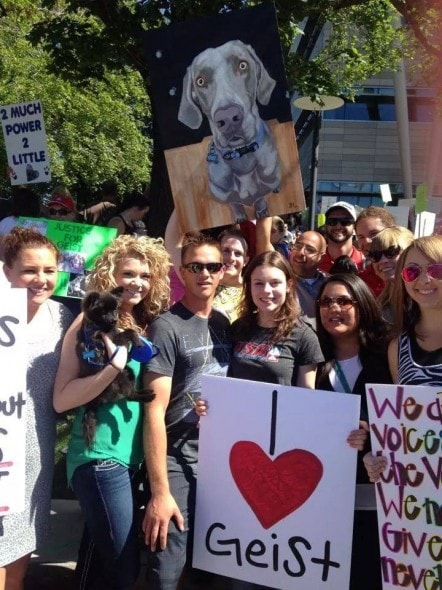 The video of the confrontation went viral, causing viewers to express their outrage both online and on the street.  The rally outside police headquarters led to the city council asking for an independent investigation into the matter, as well as a review of departmental procedures.

“It’s overwhelming, the support of the community,” Kendall said.  “That makes the loss of my best friend a little bit easier to deal with.

Police Chief Chris Burbank said he believes his officer did the right thing.

“It is our responsibility that we do all we can to bring a safe resolution to the circumstances we encounter,” he stated.  “This is a seasoned officer who has tremendous experience and has, in fact, been under fire and performed very well.  I cannot in my mind imagine an officer coming forward and saying we didn’t do all we could to find a missing child.”

So, the search for a missing child trumps being protected from having police illegally enter a property and shoot a resident’s beloved pet?  That’s apparently what Chief Burbank thinks.  As for the missing boy?  He was found inside his own house.  Good job on that search, fellas. 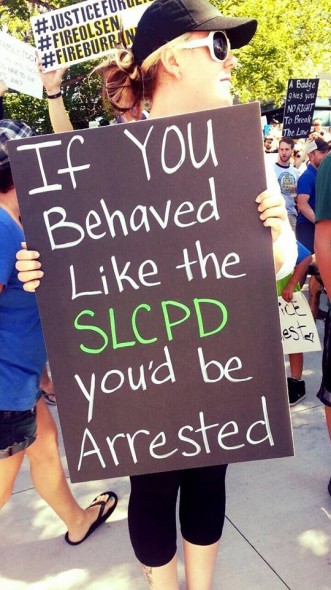 Now Kendall must mourn the loss of his companion, and hope that the community comradery will help lead to justice for Geist.

“He was kind of all I had.  To me, he wasn’t just some animal.  He was my best friend.  He was kind of like a child.  I went through raising him, training him.”