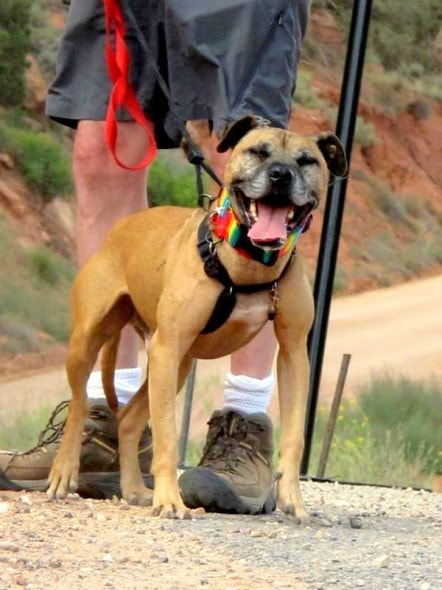 South Dakota became the 18th state to outlaw bsl when Governor Dennis Daugaard signed the bill into law in March.  The law states that no local government “may enact, maintain, or enforce any ordinance, policy, resolution, or other enactment that is specific as to the breed or perceived breed of a dog. This section does not impair the right of any local government unit to enact, maintain, or enforce any form of regulation that applies to all dogs.”

Last month, Ray the Vicktory dogs (one of the survivors of Michael Vick’s torture) had it posted on his Facebook page that he would be celebrating the day at the South Dakota Capitol Building in Pierre.

“To all my South Dakota family and friends…and especially my animal loving friends…and more importantly, my dog loving friends ……please come join me, Ray the Vicktory Dog on the steps of the South Dakota Capital Building on July 1st at 1:00 as we gather to celebrate SB75, the anti-breed discrimination bill, becoming law. Please leave your canine friends at home, as I am uncomfortable around other dogs. But we would love all the human supporters to join us as we celebrate dogs and the freedom to own the breed of your choice!  And bring a friend!”

“We are kind of hoping that it sets the tone for the rest of the Midwest states,” she said.  “If you’re a responsible owner then you should be able to own any breed of dog that you choose.”