Two dogs ended up stuck in a canoe that began floating down river after the canoe was blown offshore by the wind.  As the canoe went out, the dogs decided to jump in, only to quickly realize that they were now trapped.  Luckily, there was someone else on the shore with their dog, and they were able to get the dogs to safety.

The human on the shore can be heard giving instructions to the black dog standing next to him.  The dog is a Labrador, so he pretty much will retrieve ANYTHING you tell him to.  It’s just what he does.  So, the dog bravely swims out to the other dogs in the canoe, and despite some swift moving water, he actually makes it to them.  What happens next is nothing short of a miracle. 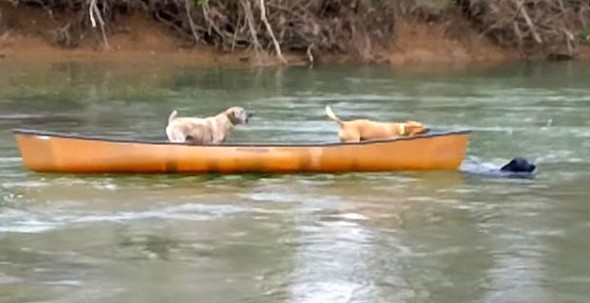 One of the dogs on the board tosses a rope over the side of the boat.  The Lab sees this, and knows to grab it and pull the other two dogs to safety.  I didn’t believe it the first time I saw it either.  In fact, I had to watch the video a couple times just to make sure I didn’t imagine all of it!

What a really brave dog!  Not only was getting to the trapped dogs one hell of a feat that would have left most humans tired and unable to continue, but for another to have the presence of mind to throw a rope overboard for your rescuer, those are some super-dog moves right there.  No matter how many dog stories and videos we cover, they never cease to amaze and inspire us!