Huey, a dog believed to have been used in dog fighting for many years was found emaciated and defeated in the front yard of a Moreno Valley, Calif., home. The home owner took in the abused dog for a night while arrangements were made to have a rescue group help him. The dog was picked up and transported to a vet clinic the next day. 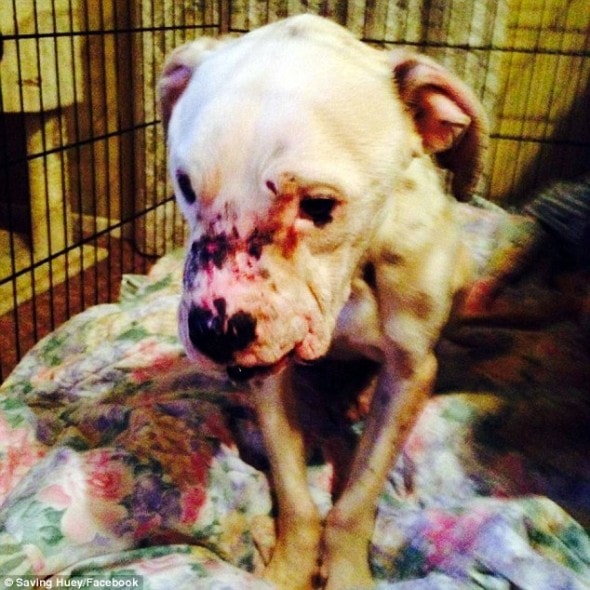 Tracy Lystra transported the injured dog to a vet in Corona, Calif., and she never imagined that she would fall in love and adopt the dog that had little chances at survival.

2nd Chances Rescue agreed to help Huey with his medical bills. When the dog was examined by a vet, the diagnosis was grim. He weighed only 33 pounds, was extremely malnourished, had ear infections, tested positive for parasites, his liver was failing, his nose area was covered in scabs and fresh wounds, his bottom jaw was mangled beyond repair, he had urine burns on his back legs, and his front legs are bowed due to lack of exercise.

Rescuers didn’t think the abused dog would make it through the night, but Huey had finally found love and he was not letting go. Today, almost a month later, Huey is a different dog.

Thanks to special care and various medical procedures, most of Huey’s injuries have healed. He still needs jaw surgery to repair the damage, but he has gained enough weight where he is now healthier.

Huey still has nightmares, he cries and whines in his sleep while he probably relives the unimaginable abuse he endured as a bait dog. Lystra comforts him every night and helps him get through the nightmares.

The pet owner is now campaigning to educate people about the horrors of dog fighting. She wants Huey’s story to be known and inspire people to fight and put an end to dog fighting.

“He is an absolutely amazing dog with a resilience that no human could ever match,” said Lystra. “It is both Huey and my hope that once Huey is healed, we can move on to the other dogs being abused in the horrific sport of dog fighting.”