David Baker was in his San Francisco apartment sleeping when a burglar broke in and snatched his computer, some electronics, and his female blue-nose Pit bull named Mochi. The pet owner made a police report but he also took to social media to spread the word about his missing pet. Thanks to his post, Mochi was found, returned home and the burglar apprehended.

“[Mochi] is the friendliest dog you’d ever meet,” Baker told NBC reporters. “I woke up and didn’t hear my dog anywhere and that’s very unusual.”

The pet owner’s social media post included a picture of the dog with a description of the pet. Mochi’s hind paws have a white patch each and this helped identify the dog and get her back to her owner.

Someone who had seen Baker’s social media plea spotted the dog on the 300 block of Eddy Street on Monday, Jan. 12, 2015. The Good Samaritan called police and the thief, 31-year-old Melisa Perna was arrested. 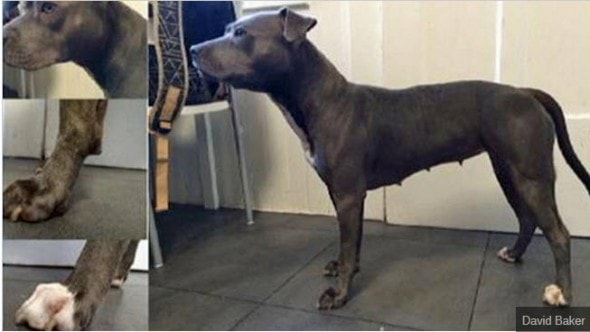 Once Mochi was returned to her owner, Baker once again posted on social media telling everyone helping him look for his dog, that the pet had been found save and sound.

17 thoughts on “Social Media Reunites Mochi, the Stolen Dog, With Her Owner”