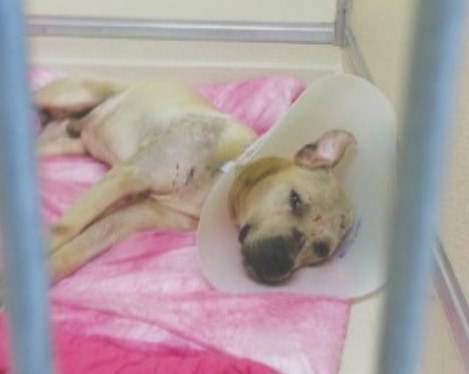 The city of Leominster, Mass., is placing a wounded dog under six-month quarantine after the canine was found abandoned, injured and malnourished on the side of Abbott Avenue.

Last April, Health Inspector Chris Knuth, came to the dog’s aid when a city resident called to report the injured animal on the side of the road. Knuth and Fitchburg Animal Control Officer Susan Kowaleski, picked him up and took him to Wachusett Animal Hospital.

Once at the hospital, it was determined the dog is a Pitbull-Terrier mix and approximately one-year-old. It appeared the injured animal is another victim of illegal dog fights. He presented recent lacerations and bite marks to his right shoulder, head, legs and muzzle in addition to old scars throughout his entire body. Also, the dog’s upper canine teeth were in horrible conditions and it was necessary to have them removed.

“The dog is doing great, he is receiving 24-hour care and is under strict six-month rabies quarantine,” said hospital’s owner, Mark Ransom.

According to the city Mayor’s office, the injured animal will be kept at an undisclosed kennel during his six-month quarantine. Once he is cleared and his health condition improves, he will be placed for adoption.