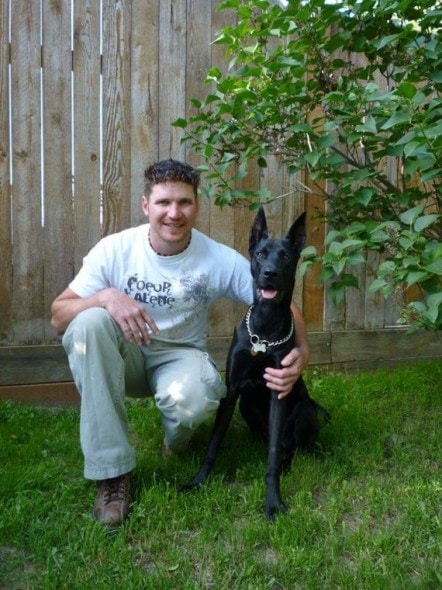 When a truck drove into the side of Jeff Groat’s home last Thursday three people were injured and his beloved dog Burke went missing.  Burke was found near the hospital’s emergency room, it is speculated that the dog followed Groat’s ambulance to the hospital.

Groat, his girlfriend Sherri Bloom and her 10-year-old daughter were playing cards on Thursday when 27-year-old Thomas Scott Heinbaugh drove his truck through the side of Groat’s home in Couer d’Alene, Idaho.  Groat, Bloom and her daughter were all rushed to the hospital with injuries.

In the aftermath of the crash no one knew what happened to Burke. On Thursday night a man who had read about the crash and seen Burke’s picture in the newspaper spotted the dog near the hospital’s emergency room. He took Burke in and cared for the dog until he could get in contact with Groat’s family and friends.

On Saturday Groat and Burke were reunited at the hospital. Burke was so excited to see Groat he had to be restrained from jumping onto the hospital bed. Groat was very relieved to see his best friend again. As he was getting treated in the hospital he had repeatedly asked where Burke was.

“His dog got him through some very difficult times in his life and it meant a great deal,” said Judy Groat. “He said ‘I don’t know if I can make it without my Burke.’”

Groat was released from the hospital on Sunday. The 10-year-old girl had been released on Saturday and her mother is still recovering at the hospital.

Heinbaugh faces D.U.I. and felony charges for the crash.