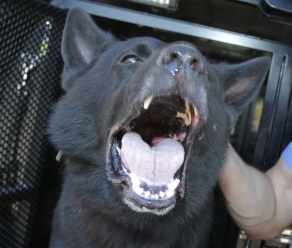 An Australian police dog went above and beyond the call of duty yesterday in pursuit of his quarry.  The determined dog was chasing down 2 men and during the pursuit he sustained a deep cut to his head, but he didn’t let that stop him.  Vector continued on, even giving chase through a body of water and not stopping until he had his teeth firmly latched on to one of the pair he was after.

Vector and his handler had been responding to a midnight call about 3 suspects burglarizing a home.  In the process of investigating the crime they discovered 2 people breaking into another nearby home and Vector was released to give chase.   When he caught up to the suspects he was able to detain one of the burglars until officers arrived, though the man did put up a struggle, for which he received a dog bite in return.

Police had to taser the man to subdue him and both men were subsequently arrested.  Later that day the 3 men that were originally being hunted were also arrested but police have not yet said whether the incidents were related.

Vector, who really went the extra mile in the service of protecting his community was taken to a veterinarian for treatment and is recovering.  Hopefully he will get lots of treats and a few days off as a reward for his dedication and hard work.