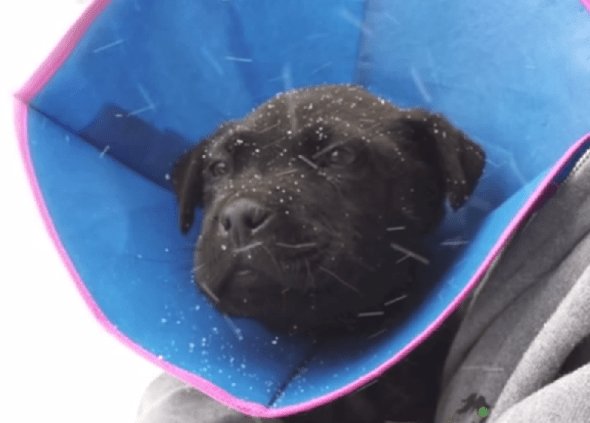 During last week’s historic snowstorm in North Carolina an injured puppy was found and rescued by a Good Samaritan. Dog lovers came through again for Pax, named for the snowstorm he survived, and donated enough funds for his emergency surgery that saved his life.

Pax was found injure and alone during the snowfall. Pax’s rescuer called Animal Services for help and they transported the nine-week-old puppy to the Asheville Humane Society. A quick examination revealed that Pax had a severely ruptured intestine and needed emergency surgery.

The staff at Asheville Humane Society rushed Pax to REACH Animal Hospital where he underwent surgery and they were told he had only a 50/50 chance of surviving.

Pax pulled through the surgery and is being carefully monitored because there is a risk of him developing a life-threatening infection. He has been making improvements everyday and his outlook is good.

The Asheville Humane Society turned to its Facebook fans to ask for help in paying for Pax’s surgery. They quickly received more than was needed from their dog loving fans. The additional funds raised are going to help another dog in their care, Alice. She was hit by a car and had to have her leg amputated.