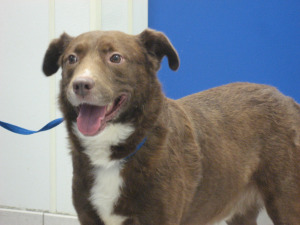 After six long months in quarantine a dog found wandering the streets in the aftermath of Superstorm Sandy finally is free and will be looking for a new home.

The dog was found by Mary Pellegrino around midnight wandering the streets of Brooklyn during the superstorm. She brought him to the New York City Board of Health. He had a collar but no tags, no microchip and worst of all a mysterious bite on his foot. There was no proof that he had received a rabies vaccine so officials told Pellegrino the dog would have to be quarantined or euthanized for rabies testing.

Pellegrino didn’t want the dog to be put down, but also couldn’t afford the city’s quarantine boarding fee. Central Veterinary Associates heard about the situation and offered to board the dog for $5 a night. Then Best Friend Animal Rescue agreed to pay that fee.

The dog, a six-year-old lab/retriever mix, was given the name Midnight based on when he was found. Over the past six months while Midnight sat in quarantine there has been great effort to try to find his owners, but none have been found.  “We did have some flyers out around the area, [but] nobody has stepped forward yet. So, he will be up for adoption if we can’t find the rightful owner, but either way he’s going to have a great life,” said Frank Florida of Guardians of Rescue.

Guardians of Rescue have taken Midnight into their care until they find him an adoptive home. Visit their website for more information.