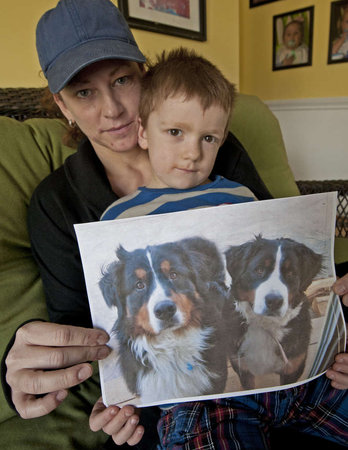 Amid anger from the public and demands for justice, Gabriel Pilotti has finally been charged with two counts of cruelty to animals and one count of recklessly endangering another person for the shooting and killing of two Bernese Mountain dogs.

Initially it appeared that Pilotti would not be charged for shooting his neighbor’s dogs Argus and Fiona when he found them on his property. Last Friday, Chester County District Attorney Thomas P. Hogan filed charges against Pilotti.

Further investigation revealed that Pilotti’s actions were in fact not shielded by a state law that permits the execution of dogs when they are attacking domestic animals. A police investigation concluded that the dogs were not attacking Pilotti’s sheep when he shot them.  “There was no justification for the killing of these two dogs,” Hogan said in a news release. “The defendant has been charged and will be dealt with appropriately. Our sympathies go out to the family and children who lost their beloved pets.”

Initially Pilotti had told police he shot the dogs with his shotgun after seeing them chasing his sheep. Investigators felt uneasy about his initial statement and questioned him again last Thursday. Upon further questioning Pilotti admitted that Argus, the first dog shot, wasn’t even anywhere near his sheep and was coming towards Pilotti slowly when Pilotti pulled the trigger. Pilotti also admitted the second dog, Fiona, was running away from him and his sheep when he shot her.

“We’re happy that justice was served,” said Mary Bock, owner of Argus and Fiona. “I’m still focused on making sure this never happens again. This is less about torturing Mr. Pilotti for what he did than about making changes for the future.” The family intends to continue to fight for changes to the state dog law

A preliminary hearing is scheduled for March 28th. All the charges are second-degree misdemeanors and carry a maximum two-year jail term and a maximum fine of $5,000.