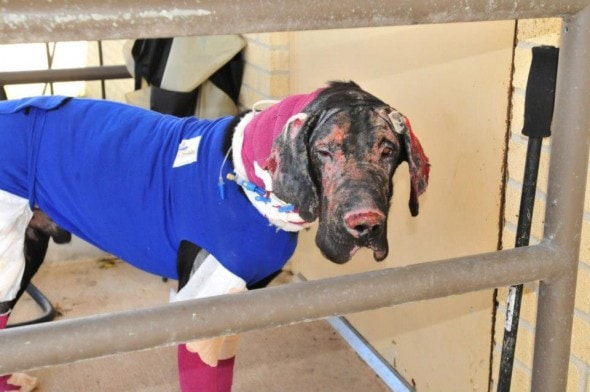 A young black lab was picked up in the streets of Houston last week and brought to the local pound. The dog was severely burned and the pound reached out to the rescue Scout’s Honor to help the dog. Without hesitation the rescue came to the dog’s aid and is hopeful for his recovery.

When the animal control officer picked up the dog he realized that over half of the dog’s body was covered in severe burns. Once brought to the pound they contacted Scout’s Honor, an all-breed, volunteer-based foster rescue program, for help. “This is probably one of the most difficult rescues we have done, emotionally and financially,” said Leslie Hillendahl, a board member of Scout’s Honor.

Though difficult, Scout’s Honor didn’t hesitate to take the black lab when the Houston pound asked. “This is just my passion and the other board members’ passion,” said Hillendahl. “We care for the animals that can’t help themselves. It’s an amazing and rewarding thing.”

The dog, which the rescue has named Pier, had an accelerant poured on him before he had been set on fire. They rushed him to an emergency veterinarian facility in Houston where he was immediately put on pain medication. Pier was then transported to the Texas A&M Small Animal Hospital early Thursday.

Pier is expected to be at Texas A&M for at least a month in ICU. Afterwards he will spend another three to four weeks in the hospital. “We do whatever we have to do to take care of him,” said Hillendahl. “We don’t euthanize animals…but focus on animals that others won’t take.” Officials at Texas A&M say Pier is in critical condition, but they are hopeful he will recover.

People from all over have been making donations to help Scout’s Honor pay for Pier’s recovery. “We’ve already have an amazing outpouring of support,” Hillendahl said. “We’ve gotten some donations already from almost all 50 states. We’ve even gotten some from Germany, South Africa and Hong Kong. We’ve never seen anything like this. Nationwide, people are reaching out to us.” A Facebook page has been created for Pier to help gain support and keep his supporters updated.

If you would like to donate to help with Pier’s recovery visit https://www.donationpay.org/scoutshonor/

2 thoughts on “Help Needed to Save Pier”