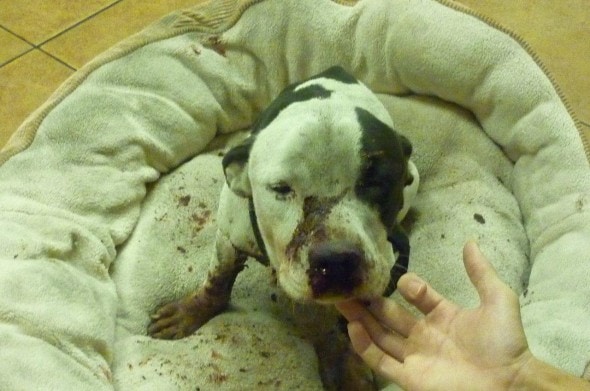 SHARE THIS STORY to help find and punish those responsible!

Animal Services in Hillsborough County, Florida are asking for the community’s help to find the person responsible for committing a horrible crime to a 2-year-old pit bull mix breed. The dog, who investigators have named Phoebe, was found buried up to her neck in sand and shot twice. It’s a miracle that she is alive.

On October 29th the Hillsborough Sheriff’s Office received an anonymous call reporting shots fired at a vacant home. Deputies arrived on the scene to find Phoebe buried alive in the backyard. Phoebe was rescued with the help of Animal Services officers. “What they saw was a dog, her head protruding from the ground still alive,” said Animal Services investigation manager Pam Perry. “The dog was whimpering. It appeared from the area in the backyard. There were blood trail. There was also blood coming from the dog’s head.”

Phoebe was brought to the emergency vet where she spent a week recovering. She not only had her gun shot wounds to recover from, but she weighed only 30 pounds. “It’s a miracle that this dog is even alive,” said Perry. Phoebe has survived and is putting weight on, but she will still need some time to completely recover from her injuries. Once she is recovered she will be looking for a good home.

Investigators are appealing to the community to please come forward with any information that they may have about this incident. The only lead they have received so far is from a neighbor who has seen teenagers hanging out at the vacant home. “Anyone please, please come forward. You can remain anonymous,” said Perry. If you have information you are asked to call Hillsborough Animal Services at (813) 744-5660.

SHARE THIS STORY to help find and punish those responsible!