Dog and Skunk Help Save Elderly Woman from House Fire 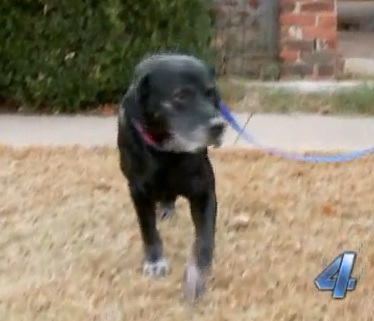 Cooper’s early morning bathroom break saved an elderly woman from a devastating fire.  Though the timing was not ideal for his owner, Frank Kirk, had they not been outside so early, the woman may have perished.

While outside taking care of business, Cooper was sprayed by a skunk.  Frank and his son, Canton Bond, went outside in the pouring rain to undertake the arduous task of washing the skunk oil from the poor, smelly dog.  When they got outside, they noticed that their neighbor’s house was quickly becoming engulfed in flames.  Immediately the pair rushed to the house and tried to get in through the garage door.

“There was just smoke pouring out all along the side of the house,” Frank said.  “The big driveway door collapsed down on the ground.  It was like, half of it was on fire.”

Flames were licking the front door frame, but the men bravely rushed through thickly billowing smoke to reach the woman.  They found her and escorted her out the back door.  Once assured she was safe, Frank and Canton alerted other neighbors.

“I’m standing in my driveway and looking at the house with flames three times as tall as the house,” said neighbor Greg King.  “Frank’s the hero.  It’s the skunk that saved the day, but that’s probably not very accurate.  Frank was the one that saved the day.”

Strangely enough, this Vietnam veteran was hailed as the neighborhood hero on Veteran’s Day.  Canton says his dad has a different idea of heroism, though.

Sadly, the woman’s dog did not make it out alive.  But at least one person did, thanks to the interestingly-timed events.

“If the skunk hadn’t been there and sprayed the dog, we wouldn’t have been out back cleaning the dog,” Frank said.