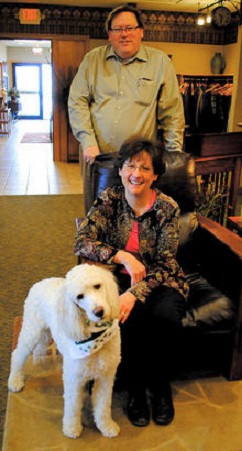 Mitchell Family Funeral Home in Marshalltown, Iowa is the most recent parlor to add a furry, four-legged member to its staff.  A year-old Goldendoodle named Gabriel has been taken on as grief dog to help comfort people in mourning.

Gabriel was taken on in December, and is one of two known grief dogs in the state.  His caretaker and the funeral home’s business manager Mary Drake says he bestows a feeling of requiescence upon mourners.

“He’s our ambassador of comfort,” she said. “There are scientific studies that say the action of petting an animal – a dog – is very calming for families.”

Gabriel is a psychotherapy-trained and registered service dog.  Many feel more comfortable expressing their grief to Gabriel rather than people – namely children.

“They can sit down and talk to the dog,” Drake explained. “They can share things they may not be able to tell an adult. That kind of opens up their grief process.”

He even knows how to do a special trick:  Gabriel will kneel against a flat surface with his head bowed until someone says “amen.”  This undoubtedly brings a smile to many morose faces.

The Goldendoodle meanders about the house during wakes, bringing solace to those who seem to need it most, but does not attend funeral services unless the family requests his presence.

4 thoughts on “Iowa Funeral Parlor Dog Bringing Comfort to Many”