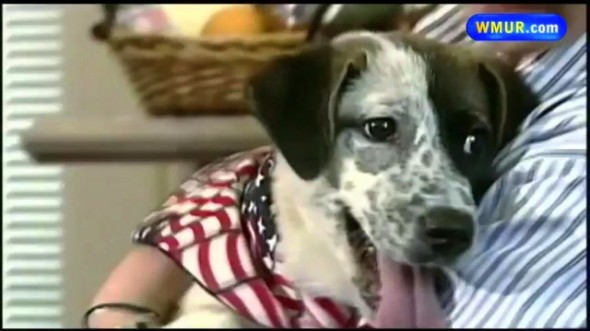 You may have heard of Hero before – she was the abandoned puppy saved by Army Spc. Justin Rollins the night before he was killed in Iraq back in 2007. Hero was brought home to Justin’s family, and her life has just been saved again, this time from a fire in her New Hampshire home.

The night before a roadside bomb claimed Justin’s life, he rescued an abandoned puppy and fell in love with her. His parents, Skip and Rhonda, requested to have her brought home, and the Army complied.

Jason Wheeler, one of Justin’s superiors and friend in the 82nd Airborne, recalls the night Iraqi police told his platoon about the puppies.

“They say, hey, there are some puppies on the old port-a-john, which was like a toilet. There’s, like, eight puppies laying underneath the toilet. So, we started playing with them, and that’s, that’s where all the pictures came from that night, that was the night before Justin got killed.”

At the funeral, Army brass asked if there was anything they could do to to help Justin’s family. 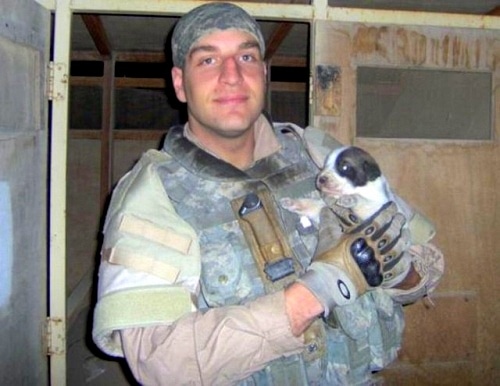 “I want nothing more than to get the puppy for them, but I can’t, because I’m just a soldier in the world of somebody else’s. And, and they’re telling me, that’s not our job, you can’t get the dog,” said Jason. “Somebody got a call, and they said, we’ve got to get the dog. And they weren’t happy about having to get the dog, and I was just like, ‘ Let’s go get the dog!’ It’s amazing that they were able to pull it off.”

“One of the biggest decisions for wanting to get Hero out of Iraq was to honor him by saying, this is the last life that he saved, so that’s the importance and the love that we have for this dog,” said Skip. “And she gave him the last bit of happiness, by the smiles on his face, when he was holding her, it’s just beautiful,” Rhonda said.

The Rollins’ decided whether boy or girl, they were going to name the puppy Hero, after their son. They credit Justin’s high school sweetheart, Brittney Murray, as the “driving” force for bringing Hero home. She stayed in contact with Cmdr. Griffin Dalianis about getting one of the puppies. and It took some doing, but she was flown to New Hampshire. On the day that the film crew for 20/20 did their shoot for the story, they captured a remarkable image: Hero was standing in the backyard when a lone ray of sunshine broke through the clouds and illuminated the now-famous dog. 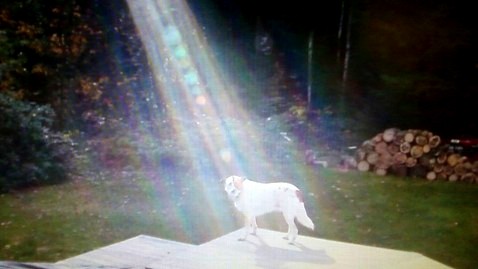 The family believes it was Justin’s presence, and they believe it was because of him that Hero was saved again. Rhonda and Skip’s Newport home caught fire, and when firefighters arrived they found Hero unresponsive.

Skip and Rhonda weren’t home at the time, but all their pets were, and firefighters bravely risked their lives to save all of them. But Hero was the only one not breathing.

“When I saw the condition she was in, my heart just sank,” said Fire Chief Wayne Conroy. “I just thought, ‘Oh my god, the dog’s not going to live.'”

Firefighters administered oxygen to Hero, but she wouldn’t wake. She was put in an ambulance and rushed to Claremont Animal Hospital, and began breathing again on the way.

“Knowing what we were going into there, it made it extremely difficult – we knew this dog had a lot of meaning to them because they lost their son in Iraq and it was just a great save.”

By the next day, Hero was back to her normal self. She is expected to make a full recovery. In addition to saving Hero, firefighters also made sure they saved Justin’s medals, awards, photos and the flag that was draped over his coffin.