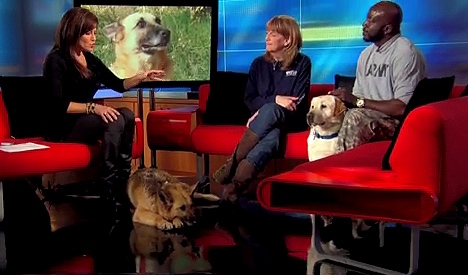 After saving lives in Iraq, explosives sniffing dogs Ivy and Nugget and many others need homes here in the U.S. Now that they are retired from duty in Iraq the International SPCA is bringing explosive sniffing dogs to the U.S. for adoption.

From the  ISPCA: In an emotional journey, seven dogs that worked tirelessly as contractors in Iraq for the U.S. Military and Coalition Forces arrived in America this week for adoption after their many years of service in Iraq.  The dogs worked primarily in the ‘Green Zone’ where they sniffed out explosives in vehicles at checkpoints, in military bases and buildings, at the airport and in hotels where Americans stayed while on business in Baghdad.  Some of the dogs worked in land mine detection as well.

“We are extremely happy to be able to give these wartime heroes a new life in loving, caring homes after all their years of service in Iraq,” said Terri Crisp of the SPCA International (www.spcai.org).  “These animals played an important and noble role protecting civilians and military personnel in Iraq and they deserve a comfortable retirement filled with love.”

The seven working dogs originally come from South Africa where they were trained before being relocated to Iraq where they worked for a security contractor based in Baghdad.  One of the dogs’ biggest discoveries while in service came when they found a rocket at the Al Mansour Hotel in Baghdad where several Americans and members of the media were staying at the time of the detection.  It is believed the dogs’ discovery may have saved hundreds of lives.

The dogs were retired from service at a typical age for service animals of their kind.  Late in 2010, SPCA International learned that these American heroes were living in solitary dog runs with little hope of a happy future.  Since then, SPCA International supporters have rallied around the dogs donating funds to help bring them to the United States and collecting over 7,000 signatures in support of their safe return.

The dogs range in age from 5 years old to 8.  They are all in good health, except for one dog, Nugget, whose epilepsy forced his early retirement.  All are very well trained and behaved.  Currently, three of the seven dogs have adoptive homes awaiting their arrival, but SPCA International is still looking for the right homes for the remaining four.  People interested in giving these wartime heroes an honorable retirement in a loving home should fill out the Adoption Application and email it to SPCA International at [email protected]

No Dog Left Behind tells the harrowing and heartwarming tales of four military servicemen who bonded with animals in the war zone and the SPCA International program that helped them rescue and reunite with their buddies at home in the U.S.