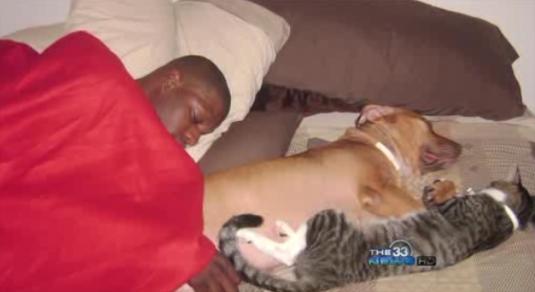 We discussed the first half of this story on our fan page, and many were troubled at the thought of permanent separation for Steven Woods and his dog, Mimi. A quick check of breaking headlines has revealed some very good news in the form of fast and complete resolution. Once again, social media and passionate animal lovers have made a difference.

Donations from all over the world poured into the Metroplex Animal Coalition and will be used to reunite the pair, who have been separated since the city took Mimi on October 14th. A Fort Worth judge declared her dangerous in a dog bite case with questionable evidence and testimony and ordered Woods to pay almost $500 in accumulated boarding fees and $500 a year to register Mimi, in addition to carrying 100K in liability insurance. Woods was also ordered to build a costly outdoor enclosure for Mimi, who normally shares a bed with her master (according to the city, keeping her indoors is not sufficient). Woods only receives $800 a month from the government and could not afford to comply with the court order.

Thanks to the generosity of strangers, that is no longer an issue. “It blew my mind, I was like, man, I am going to get my baby back. And I thank everyone who did contribute, I really appreciate it,” Woods said.

Woods was hoping to have Mimi back at home by now,  but the city is refusing to return her until the enclosure is built. “They said I was not allowed to see her,” he said.