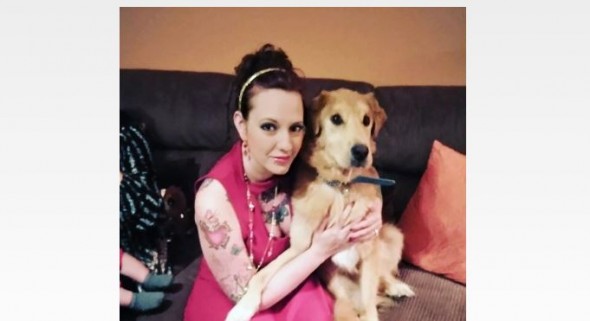 After her 2-year-old golden retriever was taken away, a Kingston, PA, woman is fighting to get back her beloved Annabelle. Nearly two months ago, alleges Lindsay Riccardo, her neighbor took the dog to the SPCA after becoming upset while dog sitting.

While the neighbor was charged with several offenses in connection with the incident, the dog was adopted out to another owner last month. The new family, however, is refusing to return the dog to Riccardo.

“Legally there is nothing we can do until a court tells us otherwise,” SPCA of Luzerne County Director of Development Peggy Nork told the Times-Tribune.

Riccardo’s attorney, Michael Casari, says the dog is stolen property and he hopes the person in possession of Annabelle agrees to return her before he has to file a court action.

The SPCA won’t disclose the name of the new owner he said, adding that he may have to get a subpoena to find out where the dog is.

“I wish they were more cooperative. I understand it’s against their policy to release information about an adoption. It’s in a stage where we are investigating,” Mr. Casari said. “We are exploring all options right now.”

Ms. Riccardo said her neighbor, Charles Fulton, volunteered to take care of her dog while she recovered from a surgery. She and her husband, a truck driver, have five kids between the ages of 5 and 12.

“He said as soon as I was feeling OK, he would bring her home,” she said.

Riccardo became suspicious when Annabelle wasn’t returned by the beginning of the month and later discovered that Fulton took the dog to the SPCA without her tags on Nov. 1 because he was mad the pet knocked over his TV.

On Dec. 13, Fulton’s brother called the SPCA asking about getting the dog back; Riccardo contacted the SPCA that day, as well, Nork said.

“If the dog came to us with identification or was microchipped, or if the family notified us anytime in the 11 days prior to making the dog available for adoption, this situation would have had a different ending,” the SPCA said in a Facebook statement. “The dog was legally adopted and in her adopted home for over a month before we were notified. We are equally upset that a friend of the Riccardo family would betray them and falsify information at our shelter. We will be looking to prosecute.”

The SPCA recommends that animal owners “consider permanent identification for their pets,” the Facebook statement says.

“It is the only sure way your animal will be home safe if lost,” the statement says.

SPCA officials “have heard so many conflicting stories about the situation,” the Facebook statement said.

The SPCA posted the statement on Facebook Dec. 21 in response to social media comments from Ms. Riccardo and other critics.

Casari said Riccardo cannot lose legal ownership of her dog because a man allegedly stole and abandoned it.

“My client has no fault in this entire matter,” he said. “She was in surgery. She gave her dog to someone she trusted. Blaming her is absurd.”

Ms. Riccardo bought her dog for $650 from a breeder in Mount Cobb in January 2015, according to a record of the purchase.

Four of her children have disabilities, and Annabelle is very important to them, Ms. Riccardo said.

The family recently adopted Marley, a 6-year-old golden retriever, from a shelter to help fill the void, Ms. Riccardo said. Yet she said she will continue to fight to get Annabelle back.

“I have been through hell,” Ms. Riccardo said. “My Annabelle was my baby girl.”