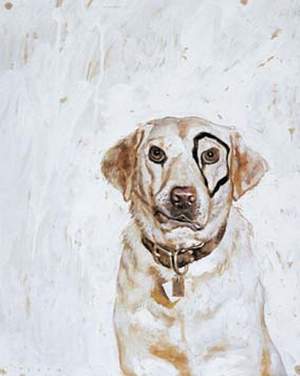 Jamie Wyeth’s “Study of Kleberg” was auctioned by Christie’s in New York on Thursday and commanded an impressive $218,500, more than five times the pre-sale estimate.

According to Wyeth, the famous circle was painted around Kleberg’s eye after the dog got a little too close to his easel, and as a Little Rascals fan, he couldn’t resist the embellishment. If his name is familiar it should be – Wyeth is the son of  famous painter Andrew Wyeth.

Christie’s said the work was purchased by private art dealer Ann Richards Nitze on behalf of an anonymous client.