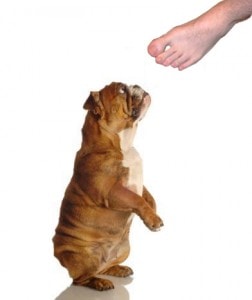 A diabetic man from Oregon is in serious condition after his dog ate three of his toes while he was sleeping. As troubling as that may be, it could very well have been an act of love.

The 61 year old diabetic man has no feeling in his feet, and fell asleep on his couch for an hour or so. When he awoke he noticed that a large portion of his foot was missing, according to EMTs.

Veterinarian Blair Bailey said that the dog may very well have been trying to remove dead tissue, and that it could have been attracted to infected or gangrenous odors, as was the case of Jerry Douthett and his dog Kiko.

Bailey says the dog will not require behavioral assessment or corrective action because it wasn’t an act of malice.

According to the American Diabetes Association, diabetics can experience serious complications with their feet. One such condition is neuropathy, which causes substantial loss of feeling in the feet.

5 thoughts on “Man’s Dog Eats Three of His Toes While He Sleeps, and That May be a Good Thing”