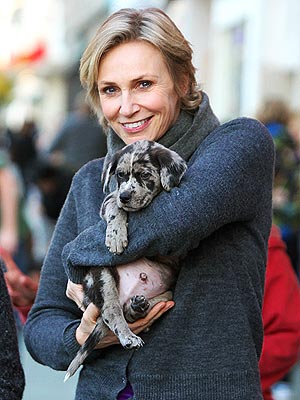 Jane Lynch is well-known for her roles in The 40-Year-Old Virgin, Talladega Nights:  The Ballad of Ricky Bobby, and most notably, as Sue Sylvester, McKinley High’s devious, bullying cheerleading coach on Glee.  But lately, she’s getting attention for what she’s been up to off-set – campaigning for shelter dogs.

She doesn’t mind sharing the spotlight with her latest co-star, Olivia.

“[She] has no bad side, she is always ready to pose and she sits perfectly still when you put her in your lap,” Lynch said.  “I’m much more temperamental.”

Olivia is Lynch’s dog, a Lhasa Apso mix that she got from a shelter 13 years ago, one day after finishing filming on Best in Show, the mockumentary about entrants of an illustrious dog show.

“She is the love of my life,” Lynch confessed.

In addition to Olivia, she also adopted dogs Frances and Georgie, and cats Frisky and Jiggles.  Now the proponent of rescue animals is putting her celebrity to good use:  she and Olivia are hosting Shelter Me: Let’s Go Home, the second installment of the PBS series Shelter Me.  The series will air on PBS across the country all summer.

“I’m restless and it’s hard to sleep with me,” Lynch said. “Olivia likes a real, steady, solid sleeper so she gets upset when I move around at night.”

But that doesn’t stop the little dog from loving or snoozing with Lynch.  The love Lynch feels from her adopted babies is what inspires her to help the millions of other shelter dogs in the US find homes.

“We are responsible for each other and the most vulnerable among us,” she said. 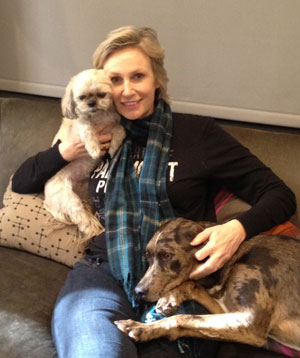 Just this past December, the dog-lover helped honor Mary Cortani of Operation Freedom Paws, an organization that aims to rescue and train shelter dogs to help wounded veterans.

“I met this guy David, who had a severe brain injury and emotional trauma. He’s functioning well, but he was paranoid and couldn’t walk down the street without pulling his gun out to defend himself,” she said.  “This dog totally calmed him. He’s a new man. In fact, he gave me his dog tags, which were melted. The metal on them was melted from the explosion he was in.”

Lynch was told by Cortani that giving her his tags was cathartic, and that he was letting go of some of his experience.