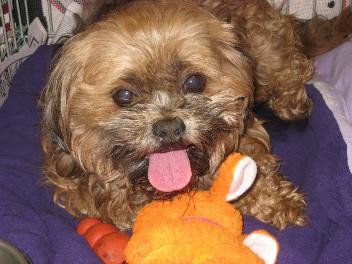 A Wheatfield, NY man was sentenced to five years’ probation on Thursday for fracturing a dog’s pelvis.  Jason E. Evrard, 27, smashed his grandmother’s dog to the floor when it killed one of his kittens.

Jan Evrard was forced to surrender her eight-year-old Lhasa Apso, named Abby, to the Niagara County SPCA because she could not afford the X-rays and medical treatment required after her grandson’s violent reaction.

Evrard pleaded guilty to the felony count of aggravated cruelty to animals.  State Supreme Court Justice Richard Kloch Sr. changed his initial sentence of one year in jail to five years’ probation.  Evrard has already served just under six months.  But the judge had plenty to say to the offender.

“You served 176 days and you deserved every one of them, and you deserve more,” Kloch said.  “People think probation is a slap on the wrist.  It’s worse than if I sentenced you to straight time.”

Evrard agreed.  If he doesn’t stay out of trouble for the next five years, he will be sent to a state prison for up to four years.

Abby had gotten into the room with his cat and her two-week-old kittens when someone accidentally left the door open.  She got along well with the mother cat, but was playing with one of the kittens too roughly and inadvertently killed it.  Evrard reacted out of anger and distress when he picked Abby up off of his grandmother’s lap and heaved her to the floor, but Kloch said that did not excuse him.

“You think the dog said in his little dog brain, ‘I’m going to commit murder, catricide?’  It was just doing what a dog does,” stressed Judge Kloch.  “Animals are animals, and we’re supposed to have higher brain power.  So why did you act like an animal?”

Kloch was not satisfied with this answer, and asked the defendant how he would be assured that the same might not happen to the man’s children.  He has a history of violence, and Evrard told the judge that he had taken an anger management course in jail.  Kloch made additional anger management courses conditional to his probation to safeguard against such behavior happening in the future.