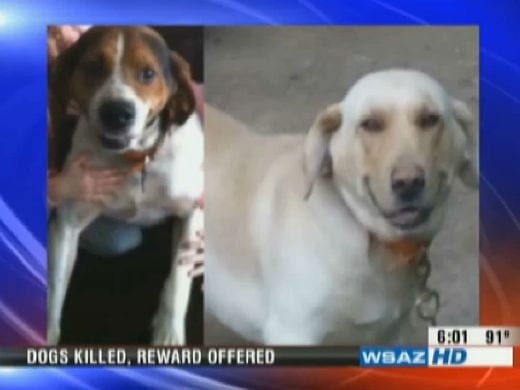 Two men were sentenced to the maximum penalties allowed under Ohio law in deaths of Bubba and Bear, the beloved family pets of Josie and Michael Scythes.

In the Ironton Municipal Court, Jonathan Jiles, 20, of Pedro, and Brian Sharp, 20, of Pedro, pleaded guilty to prohibition concerning companion animals and criminal trespassing. Judge Oakley Clark Collins Jr. said of the crime, “This is the meanest act I’ve ever seen.”

In August Josie and Michael Scythes found Bubba and Bear brutally stabbed to death in the front yard of their home in Pedro, OH. The Scythes had gone out for the evening and left their two dogs chained in the front yard. They returned to find a grisly scene: Bubba and Bear had both been stabbed and their throats slit. One of the dogs had been torn in half trying to escape his attacker.

The Scythes posted a $1000.00 reward to try to find the killer. Sheriff Jeff Lawless quickly apprehended Jonathan Jiles, with Brian Sharp in custody days later. The heinous nature of the crime motivated Lawless to go after as many charges as possible. “When you have a crime like this, where people have targeted these innocent animals, we wanted to go after them. And as we looked at the statutes that would govern this for the Ohio Revised Code, cruelty to animals is certainly a charge that would stick so we wanted to research to see if there was something that was a little more stringent because we felt like the nature of the crime warranted a little bit more. So we were able to come up with a prohibition concerning companion animals charge.”

Both men will serve seven months in the county jail, three years probation and fined $1,200. They must also pay restitution of $800 to the dog’s owner and can’t own a penned animal for three years.

At the time of their arrest, both men admitted to stabbing the dogs. This appears to be a random act of senseless violence as both men were drunk at the time and did not specifically target the Scythes. The men told the court at sentencing that they were sorry for what they did.

Josie Scythes commented after the sentencing, “I just couldn’t believe why they would do something like this. Why they would want to do it. I’m very pleased they got the max the law would allow for such a brutal act. It should be considered a felony.”

26 thoughts on “Justice for Bubba and Bear: Maximum Sentence in Brutal Stabbing”