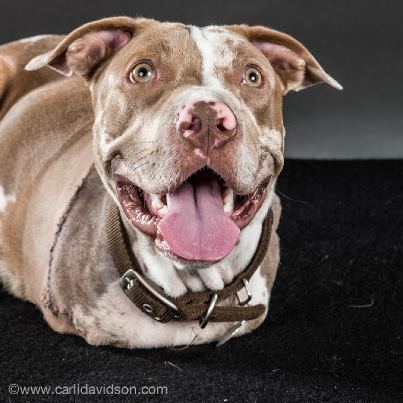 London is the sweet pit bull pup brought to Humane Society of Del Norte’s shelter in Crescent City, CA with severe untreated injuries last month and turned over Panda Paws Rescue of Vancouver, WA. London had both front legs amputated two weeks ago, and is healing well and getting around beautifully as he flourishes in the happy, loving environment provided for him by his rescuers.

Though it was acknowledged that London’s former owners were neglectful and abusive, official details on London’s history and abuse remained vague as local California authorities pursued an investigation.

Amanda Geise wrote to us and posted at the Panda Paws Rescue and Team London Facebook pages yesterday with an update clarifying London’s history and the source of the injuries that led to the double amputation of his front legs. As the investigation was underway, the “fell from a 2nd or 3rd story window” story was maintained to explain the sweet young boy’s injuries. The version of the story given to London’s caregivers this week follow below in a statement made by Panda Paws yesterday.

It is with great pleasure that we update the World on London’s story. If you had not previously heard, the truth behind his shattered elbows & vague history have come to light.

Early this morning Amanda Giese, Founder of Panda Paws Rescue, was provided with statements & evidence depicting brutal attacks on London that had occurred months ago. His legs were not in fact fractured as a result of a fall from a significant height. It is now known his legs were purposely & deliberately broken at the hands of his previous owners on two separate occasions. Witnesses were present during the attacks & have come forth with the facts, names of the abusers & are working with the Crescent City Police Department as well as Jon Alexander, District Attorney of Crescent City, CA.

We can tell you that multiple suspects HAVE been arrested, are in custody & are being formally charged with felonies in this case. I just got off the phone with the DA & he personally asked me to thank the community of supporters standing behind London & wanted to assure you justice will be served!

Team London would like to thank the CCPD & Jon Alexander for expediting this process & for all of their hard work they have put into this matter! Thank you from all of Team London & we will keep you all updated! – Amanda Giese, Team London

This video from August 6 consists of outtakes shot on day 5 following London’s surgery. As in all of the videos Panda Paws has made with him, London is completely sweet, adorable and trusting, and shows an inspiring spirit and joy in living.

The two videos in our post yesterday, London the Double Amputee Pit Bull Pup: Happy, Loving Dog at Play, show him in recent days playing and giving and getting love.