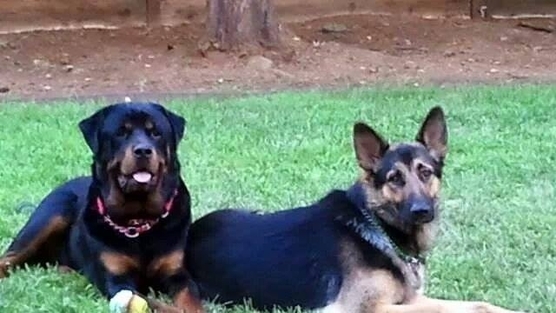 A petition has been started to change a California law that is currently protecting a man who killed two dogs that got out of their yard and into his.

Ellen Barkley is mourning the loss of her foster German shepherd and Rottweiler, Luke and Jager, who escaped from her yard on Saturday. She and one of her daughters knocked on doors and put out dozens of fliers.

But their search for the rescue dogs came to an abrupt end when 32-year-old Jon Christ admitted to killing the pair, claiming he found them in a chicken coop, covered in blood. He said the dogs charged when he tried to get them out of the coop, so he bludgeoned them to death with a shovel.

Rather than immediately call police, or check the tags both dogs were wearing to find their owner, he dug a hole on his employer’s property, dumped the bodies and set them on fire. He then finished burying them.

It might never be known what really happened. Did Jon Christ cold-heartedly murder two neighbor dogs, or was he just protecting the livestock? The law is on his side, giving him the right to protect his animals.

Part of the California law protecting him reads as follows:

“The allegations and statements said the (dogs) were killed with a shovel,” said Rick Golphin, deputy director of Contra Costa County Animal Services. “That alone is not enough. If you are on a farm property and animals approach livestock or poultry, the law allows for them to be killed.

“It’s just unfortunate when two beautiful animals are killed, not necessarily in an illegal way but certainly in a tragic way.”

Any evidence that the dogs did not even attack the chickens was destroyed by the fire, so Barkley knows that she may never see justice for her boys. But she would like to see the law changed to protect family animals that just happen to get loose, and are not vicious attackers. As the law currently states, a dog that gets onto a farm and “worries” the other animals is legally allowed to be killed. Any friendly dog that gets loose is at risk of being killed for being curious. Just as there are laws to protect farm animals, there needs to be laws that protect our pets from the farmers.

If you would like to sign the petition calling for justice for Luke and Jager, please visit here.