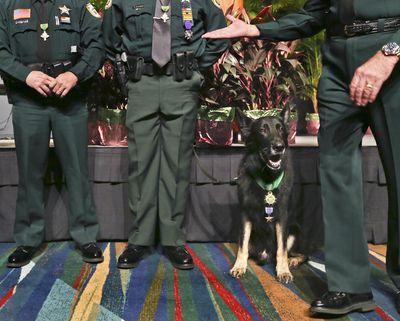 On June 4th, a 911 call came in reporting that a woman had been shot. Deputies rushed to the scene and surrounded the area.Deputy Klaysmat spotted the suspect fleeing the scene by jumping over a wall. While Kenzo was scanning the wall for the suspect something drew his attention to his right. When Kenzo, Deputy Klayzmat, and two other officers looked over to the right they were greeted with gunshots. 40 rounds were fired at Kenzo and the other police officers by suspect Armando Gonzalez Felipe.

The police officers fired back killing Felipe, but not before they took some bullets themselves. Lieutenant Richard Burdick was shot in the leg and Kenzo took two bullets, one in his torso and one which lodged into his chest. “He took two bullets and kept going…What he did was beyond reasonable,” said Sheriff Ric Bradshaw. Kenzo’s actions likely distracted the gunman from shooting at the deputies first. Klaysmat and Bradshaw believe that the bullets Kenzo took saved Kalysmat’s life and the life of one of the other deputies.

Kenzo was rushed to the animal hospital where doctors removed the bullet from his chest. The bullet had barely missed Kenzo’s vital organs. Thankfully, Kenzo made a full recovery and was back to work two months later. The emotions Deputy Klaysmat felt on the ride to the animal hospital still stick with him. He thought he was going to lose his partner.

On November 16th, the Palm Beach County Sheriff’s Office held a ceremony awarding honors to many deputies on their force. Both Kenzo and his handler Deputy Klaysmat received a Combat Cross, the equivalent of the military’s Purple Heart. Kenzo was also bestowed with the highest honor in law enforcement, the Medal of Honor. As Sheriff Bradshaw placed the medal around Kenzo’s neck and kissed his head the crowd of over a thousand stood and clapped.

Kenzo is nearing the end of his career at 9 years old. It will be a hard goodbye for the deputies who stood beside him that night, especially his handler. “I can’t imagine getting my next dog,” Klaysmat said. “He’s my son. I take him to the park like a kid. I can’t think of anything I spend more time with than this dog.”