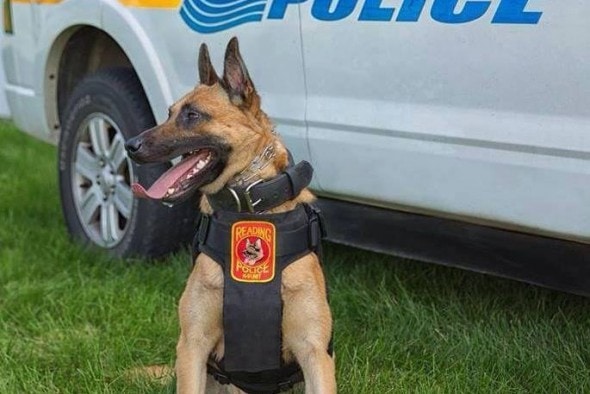 Cody is a K-9 police officer from Reading, Pennsylvania.  Even though he sustained a very serious injury while on the job, thanks to good planning by a great deal of local government, medical and law enforcement, Cody’s recovery is going very well.

While on duty, Cody and his handler, Officer John Hutchinson were called to investigate a possible break-in at a local school.  While searching for the suspected intruder, Cody fell off a suspended walkway.

When he fell, Cody hit his head on a steam pipe on the way down and hit the floor hard.  He suffered from really bad internal bleeding, and thanks to the quick thinking and solid training Officer Hutchinson received while training with Cody, the K-9 officer’s life was saved.

Wile training and perpetration were responsible for helping Cody in the immediate, the excellent behind the scenes planning of local medical staff, both first responders and hospital staff, and regulations set in action by local government, the rest of Cody’s care wasn’t an issue at all.

There are now protocols in place for injured dogs needing immediate medical assistance that make transportation a non issue.  Using medevac helicopters and specially made medical equipment for dogs in ambulances, many more lives will be saved.  Just like Cody’s was.

Reading may have had the very first medevac airlift for a dog in the history of the United States.  Even the local animal hospital in University City, Pennsylvania can be advised of an incoming animal, the same way humans do.