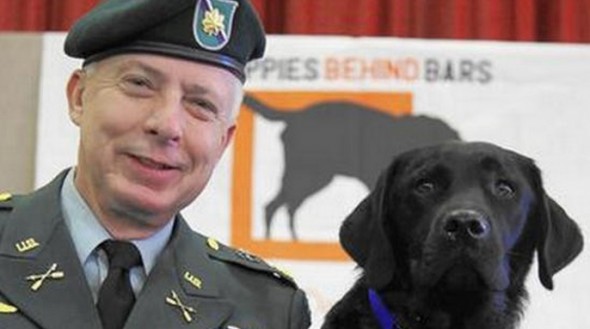 Major Diggs Brown, a retired Army veteran and former city council member in Colorado wanted to eat breakfast at Chicago’s Cochon Volant recently.  Upon arrival, he and his therapy dog Arthur Baker Black were told that there is no way he’d be allowed into the restaurant with his dog, and was turned away.

Even though Maj. Brown needs Arthur to help manage issues and symptoms he suffers through having post traumatic stress disorder, or PTSD, Cochon Volant was not having it.  According to him, this forced he and his dog to look elsewhere for food.

“I have no animosity toward this restaurant,” Maj. Brown said.  “It’s just a fact of life that a lot of people are not aware of the ADA laws and how they pertain to service dogs or service animals.”

After an outcry on social media websites against the restaurant, Cochon Volant has issued two public apologies to Maj. Brown and Arthur.  One made Saturday morning, and another on Sunday.  They were posted to the restaurant’s Facebook page, and in an effort to make things right, the restaurant decided to make a donation to Puppies Behind Bars.

Despite the efforts of the restaurant, many people on Facebook didn’t exactly have the kindest of sentiments towards Cochon Volant.  The restaurant’s general manager, Josh Schatan said that they have been in contact with Maj. Brown, and the situation has been rectified.

“Yesterday’s circumstance was not a true representation of our company policy and we have begun immediate internal review of protocol, training of staff and ADA (Americans with Disabilities Act) regulations to ensure this will never happen again,” said Schatan.

This hasn’t totally soured Maj. Brown’s opinion of every business in Chicago.  The Hyatt Centric hotel that they were staying at was very accommodating to Arthur.  They had even brought Arthur his own bed, bowls and treats.

Unfortunately, these situations are cropping up more often all over the United States.  Some chalk it up to a lack of knowledge as to the rules and regulations surrounding dogs and the ADA, others are convinced it’s nothing more than a discriminatory thing.  However, many people are being denied service at many places, and in today’s day and age, not knowing the laws is a poor excuse.  Most especially when things like Google and the internet are available to most Americans on command.

46 thoughts on “Vet and Service Dog Get Apology from Restaurant”