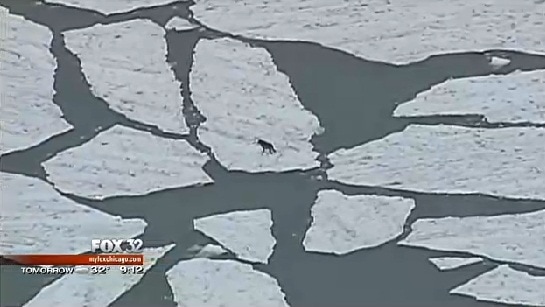 When a dog became stranded on ice floes in Lake Michigan, emergency crews sprang into action.  A police helicopter and fire department boat were employed, but the dog wasn’t brought to safety until a quick-acting kayaker braved the frigid water to rescue him.

The Nova Scotia duck tolling retriever had been seen about half a mile out, hopping from one ice sheet to another.  According to a Chicago police officer, a helicopter was sent to hover over the dog with the hope that the air currents and sound from the rotors would chase the dog toward shore.  A fire boat was sent out, and a spool of lifesaving line was being set up to capture the drifting dog.  But then a man in a kayak arrived.

Dave Kehnast had seen the dog from the fire escape of his apartment building, and rushed out to help.  He grabbed his kayak and put on a wetsuit.

“I saw him way out there and so I grabbed the kayak over here, and I know that the lake is only a couple of feet deep all the way out to where the ice shelf ends,” Kehnast said.  “So I knew I’d be fine.”

He paddled out to the dog and tried to coax him to the boat.

Kehnast lowered himself into the dangerously cold water to guide the dog toward land.  He ventured into the water and made his way to shore.  He took off, but was corralled and taken to animal control, where he is being held over the weekend. 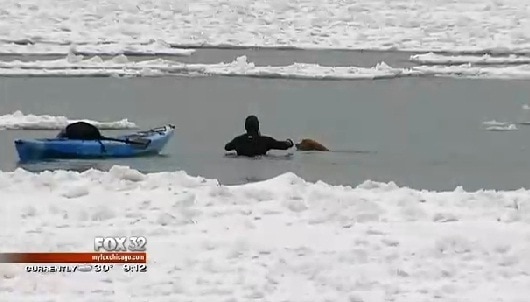 “It was a concerted effort with the help of the police, the Chicago Fire department, and the citizen,’’ the officer said.

The dog was wearing a collar, and owner Nerijus Stepenovicius was contacted.  He said that his dog, whose name is Pifas, escaped and went missing nine days earlier while he was having his locks changed.  Stepenovicius wasn’t surprised that Kehnast had a difficult time getting the dog to come to him, as Pifas is very skittish.

“He is a very shy, very shy dog, so if or anyone would try to come to him, he would run away,” Stepenovicius explained.

“I don’t know if he realized what kind of danger he was actually in,” Kehnast said.

Stepenovicius is grateful for Kehnast’s efforts, and would like “Just to thank him.  I know it’s just words but I have to say them and to know him would be better.”

He plans to buy dinner for Kehnast once he is reunited with Pifas.
Chicago News and Weather | FOX 32 News