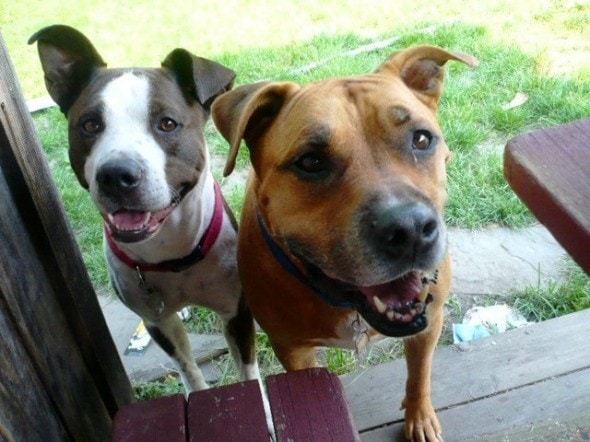 Two years ago when a pit bull attacked another dog in Dunbar Hill, CT, residents banded together to urge officials to ban the breed from their streets.  But the state has opted not to take such a drastic measure and instead has introduced a bill that would prohibit municipalities from breed specific legislation.

“The whole idea behind it is vilifying, it is uneducated and unnecessary,” she said.  “Some states like Ohio and Florida will try to take a family pet away because they are a certain breed such as Staffordshire terrier, German shepherd or Rottweiler.  You hear it so often but it bears repeating:  it’s not the dog, it’s the owner.  Some people will breed the dog to be aggressive, but even those dogs when removed and put into a family environment will thrive.”

Urban has a pit bull that was rescued from Ohio.  She is regularly around children and has never shown aggression.

“In Ohio she is labeled a dangerous dog because she is a pit bull mix — it boggles the mind,” Urban said. “It’s like saying because I am blonde, I’m stupid.  I’m not saying a dog can’t be labeled as dangerous, but its breed can’t be the criteria.”

She believes banning certain breeds would only take them away from responsible owners and spurn a black market for breeders that would create dogs who live up to the stereotypes.  After all, criminals who turn sweet dogs into fighters are highly unlikely to follow a breed ban, anyway.

Trapp cites the American Temperament Society’s breed aggression statistics.  The American pit bull terrier and the Staffordshire terrier rate higher than many other breeds, and are within the same range as golden and Labrador retrievers, which are often viewed as family-friendly dogs.

She also says that according to a 2010 study conducted by the National Canine Research Council, in order to prevent just one hospitalization from a dog bite, a municipality would have to ban more than 100,000 of the targeted dogs.

“Dog-bite related fatalities are so extremely rare that not even a state could ban enough dogs to insure that they had prevented even one,” Trapp said.  “Both history, scientific study and common sense will tell you such a law is ineffective, unjust, and will likely backfire.”

Despite seeing stories about dogs mauling both humans and other dogs, readers must consider that for every one dog that attacks with its teeth, there are thousands, if not millions, that only attack with their tongues.