Acting on a tip, police raided an abandoned kennel in Summerdale, Alabama on Thursday night and were horrified to find hundreds of starved, dead or neglected animals left to die in their cages. 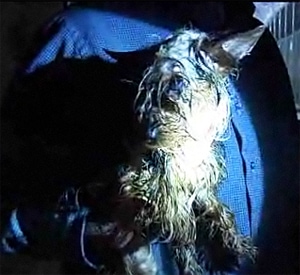 The owners of Purple Hearted Puppies skipped town more than ten days ago, leaving the animals in their care to fend for themselves. Purple Hearted Puppies bills itself as a rescue organization, but it is believed that the owners of the kennel were also using it as a breeding facility. The kennel also offered boarding for local pet owners, and as news of the abandonment spread, concerned clients returned to retrieve their pets. Some were too late.

“I’ve never seen anything this bad,” said one pet owner, sobbing. “I’m going to have to say may God never forgive them for the tragedy they have created.”

Baldwin County Humane Society executive director Sonja Presley agrees, noting that some of the dog carcasses had been consumed by other starving dogs. “It was survival,” she said. “They cannibalized the other dogs.”

Veterinarians, shelter workers, and police began feeding, cleaning and treating more than 200 neglected dogs, cats, horses and poultry when officials, acting on another tip, found another two dozen neglected animals at the owners’ home in Robertsdale. The owners of Purple Hearted Puppies, Roberta Dueitt and her daughter, Sharon Dueitt, were arrested Thursday night and charged with multiple counts of cruelty to animals.

Now the hard work of rehabilitating the survivors begins, and the Baldwin County Humane Society has been overwhelmed by the unanticipated influx of hundreds of animals, many of them requiring medical care. Help is needed desparately.

Presley says: “It’s voluminous and it’s taking all the rescue groups and veterinary clinics to collaborate. No one has ever seen this magnitude of animal cruelty in Baldwin County.”

Anyone in the area considering adoption should contact the humane society as soon as possible. Foster homes will be needed in the near future, and supplies are running low:  police are asking for pet food donations, blankets, and kennels.

An officer on the scene was interviewed, and struggled to contain his disgust as he described what he saw. “Some of these animals were forced to eat other animals to survive,” he said. “You know there are a lot of sorry people in the world, but these (people) rank up there with the best of them.”