Just over a year ago, a young hound/boxer mix was living at a Greensboro, North Carolina after being abandoned by his owner. His new family says he’s just perfect, and that they can’t imagine a day without him. Sammy’s second chance is the basis for a wonderful rags to riches story that proves anything is possible when potential is recognized and realized. It just took the right man to see it. 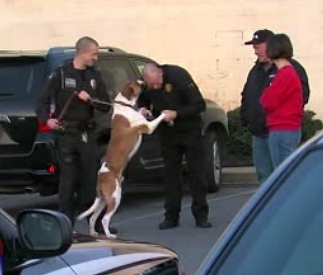 That man is Adam Witherspoon with Shiloh K-9, a local facility that specializes in police K-9 training. While Sammy’s owners found him too energetic, Witherspoon said he believed that Sammy was simply misunderstood. “He was very difficult to keep from jumping up on people, mouthing on people. He was a little disruptive,” said Witherspoon.

On a hunch, Witherspoon decided to put Sammy through aptitude testing, and said he was stunned by the outcome. “We had never thought to test this dog to see if he would be suitable for any type of service work, and upon testing him, wow. I mean, his hunt drive was just through the roof,” Witherspoon said.

Sammy showed enough promise to convince Witherspoon to take him in, and after extensive training, a star was born. Sammy was a natural at tracking, and his advanced skills were just good enough to land the former pound occupant a new job as one of the Walnut Cove Police department’s newest crime fighters.

Witherspoon says that despite his remarkable drive and uncanny abilities, Sammy is an atypical K-9. “He’s a rags-to-riches, you know. There aren’t many times that a K-9 officer pulls up and gets out with a hound boxer mix, but when you watch him work, he demands your respect. He does it so well,” he said.

Sammy has worked closely with Walnut Cove Officer Justin Gallimore for the past three months, and has been a welcome addition to the squad. It’s not just the working relationship that fellow officers appreciate – Sammy isn’t just a coworker, he’s also a faithful, friendly companion. Given the chance to prove himself, the once unwanted dog is now anything but, and his new family has no plans to let him go anywhere.

“It seems like forever (now). It would be hard to give a dog up now that you’re attached to him,” Gallimore said.