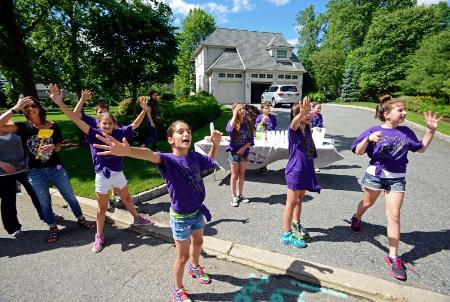 On Wednesday afternoon, 11 New Jersey kids were doing what you might expect them to do on a nice summer day: having a lemonade sale. But they weren’t raising money for candy or toys; instead, they raised nearly $900 for an injured shelter dog named Lola.

Lola is a one-year-old Yorkshire terrier whose front legs were broken when she was dropped by her previous owner. They were able to have her legs put in casts, but could not afford additional treatment and gave her up. She is staying at the Animal Specialty Center in Yonkers, NY, but Tenafly, NJ shelter Pet ReQ Inc. is coordinating her medical care.

“I’ve (rescued animals) in every disaster since 9/11. It’s not pretty what I do,” said Pet ResQ founder Robyn Urman. “But this one’s really killing me.”

Lola’s legs had not been set properly, and when her casts were removed it was discovered that one of her legs was so badly infected that she would probably never be able to walk on it again. On Tuesday, staff members made the difficult decision to amputate. The cost of the amputation and resetting, along with the basic costs of food and housing, could cost upward of $10,000. Though her other broken leg has been recasted, it may also need to be severed. 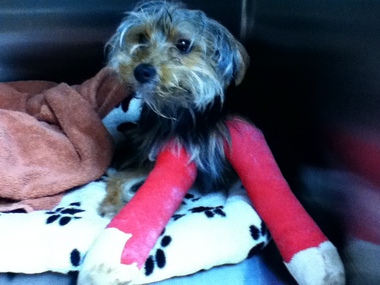 When 11-year-old Olivia Pizzurro heard about Lola, she knew she wanted to help. Last year her family set up a lemonade stand that brought in $720 for the shelter, so she and some friends got to work setting one up for this special case.

The kids donned purple t-shirts and flagged down passing cars. They priced beverages at $2, but some people were so touched by the kids’ charitable spirit, they donated $25 or more per glass. By late afternoon, $859 had been collected.

“[Customers] saw the signs and what it was for and became overly generous,” said Alexis Pizzurro, whose home was the site of the fundraiser.

For more information on how you can help, please visit: http://www.petresqinc.org/