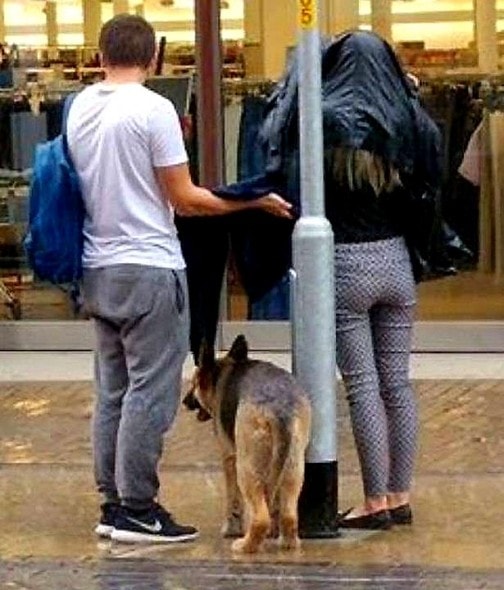 An unidentified man and woman who were walking down a street took pity on a dog that had been left tied up and was stuck out in a very sudden storm.  They spent 20 minutes covering the dog with a jacket and umbrella until the owner came out of a store.

The shivering Alsatian had been tethered to a lamp post while her owner shopped inside of a Marks & Spencer in Dover in the UK.  Regardless of the weather, dogs should never be left tied up while people run errands.  They can be stolen, get loose, or in this case, get drenched.

The rainstorm came on quite unexpectedly, leaving the poor dog with no choice but to stand in it.  When a couple walked by and saw no owner in sight, the man took his jacket off and covered her up.

Jon Sparkes, a worker at Gala Bingo Dover, saw what was going on and snapped a few pics.

“The rain was coming down really hard but these two people saw the dog was tied up to the lamppost and basically gave it shelter.” 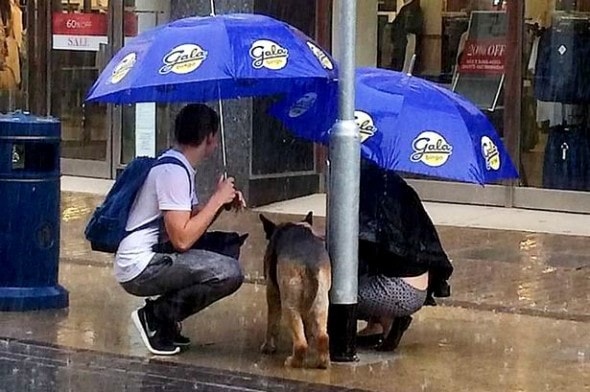 “As you can see the dude has taken his top off to protect the dog – the dog was there before the rain came. They’ve selflessly protected the dog from rain and we’ve seen that and gave them umbrellas.

“They were really grateful and they waited there until the owner came back who was also very grateful to the couple.”

Another man at the bingo hall, Ricky Cook, also saw the act of kindness.

“We had no idea who they were, they just turned up and the guy had even taken his jacket off. Jon took them over some umbrellas to help them out.

“It wasn’t raining originally, but after the dog had been waiting around five or ten minutes, there was just this sudden downpour.

“The couple stayed with the dog about 15 to 20 minutes for the owner to return.  It wasn’t like an animal cruelty thing, they were just being nice. It just started raining out of nowhere.”