Last week we told you about a dog running loose on the Los Angeles 710 Freeway. After the dog was captured, taken to animal control, placed on mandatory hold, and then released for adoption, the Freeway dog was reunited with her rightful owner. 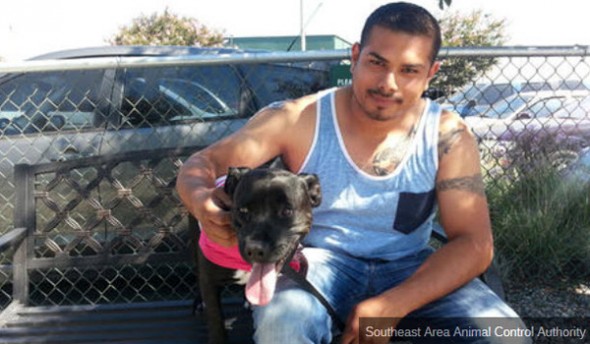 On August 21, 2014, a news helicopter reporting traffic times televised the chase and safe capture of the Freeway dog. The black, female Pit bull mix was rescued by Andie Valerio. This heroic woman, spotted the dog running on the highway and she abandoned her car to run after the pet. After a few minutes of an intense chase, Valerio had the runaway dog safe in her arms.

The dog was picked up by Animal Control later and placed on a three-day hold giving her rightful owner a chance to claim her. Valerio did say that if the dog’s owner was not found, she would gladly add the dog to her pack. The hero rescuer wasn’t the only one willing to adopt this pet, many area animal lovers inquired about the dog and hoped to be selected as the dog’s new forever owner. However, the canine didn’t need a new home or owner, her rightful owner came to claime her just a few days after she was made available for adoption.

Rigoberto Gaspar had been looking for his dog, Snow, since she got lost. Gaspar had no idea his dog was waiting for him at the Downey animal shelter and had spent many days looking for her. The pet owner learned the whereabouts of his pet after some friends told him they had seen Snow on the news. Thanks to them, the Freeway dog was reunited with her owner.

On August 27, 2014, Gaspar went to the shelter and picked up his dog. Snow is now back where she belong.