WARNING:  This story is absolutely NOT for children, but it definitely IS for adults with a good sense of humor.  Many dogs are happy to grab a stick they find while out on a walk and carry it around for a bit, but what a chocolate Lab named Galaxy found is jaw-dropping!

“I’ve never seen anything like it in my life,” Natalie told Metro.  “Galaxy was coming towards it and I turned to Amy and said, ‘That’s not a… surely that’s not a…’

“I couldn’t even get my words out. I was gobsmacked. Galaxy obviously didn’t have a clue and was just strutting round like it was the most normal thing in the world.

“We couldn’t believe it. He was so proud when he brought it over to us. We were looking at it thinking, ‘That’s impossible’. It was enormous.

“Me and Amy were in stitches. We would normally put things in the bin if the dogs pick them up but Galaxy carried it round for about half an hour.”

Naturally, they did end up pitching it.  But what’s even stranger and funnier – if you’ve got a truly twisted sense of humor – is that Amy’s husband, Ste, fetched it out of the garbage can with the impish idea of using it as a trophy for the winner of his football club’s golf fundraiser tournament – after thoroughly washing it, of course.

“I ended up being in the winning pair,” Ste said.  “We posed for some pictures and now it’s on display at the pub we all go to.” 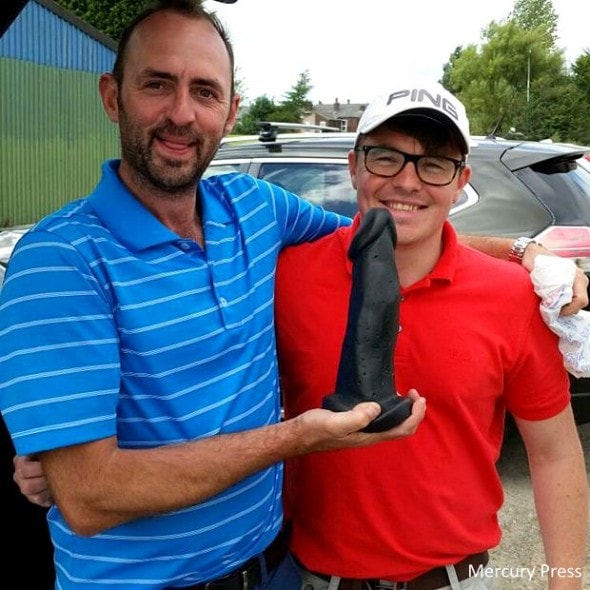