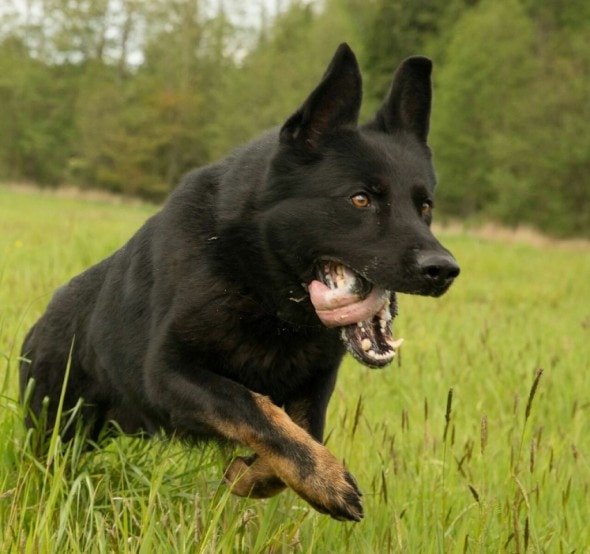 Boomer is a police dog from Nanaimo, British Columbia, and is a hero for rescuing an elderly woman from the wilderness she had been stuck in for four days.  A person on a motorcycle discovered her empty vehicle off to the side of the road and called the police.  Boomer, along with his handler Constable Wurzinger did the rest.

“With no track or scent detected near her car, Boomer and Wurzinger and the pilot from Air 8 set out searching the extensive array of logging roads,” said the police in a press release.  “Approximately 5 hours later Boomer straightened, alerting his handler to a possible scent of the missing woman. Constable Wurzinger climbed over a nearby embankment and miraculously, the missing female was spotted lying at the base of the berm.  In obvious discomfort and barely able to speak, the female managed to reach out, grab the officers hand and whisper ‘thank you’ over and over again.”

It took about two hours for emergency services to administer first aid, but once they felt comfortable moving her, she was airlifted to the hospital.  She was injured in the ordeal, and being stuck injured in the wilderness alone isn’t an easy thing.  However, despite being in rough shape, she’s expected to make a full recovery.

“Constable Wurzinger and Boomer’s perseverance in this search led to an outstanding result,” said Superintendent Mark Fisher of the Nanaimo RCMP.  “Outcomes like this make us all proud of the professionalism and high level of training that Clay and Boomer bring to work on a daily basis in Nanaimo. We are lucky to have them here.”