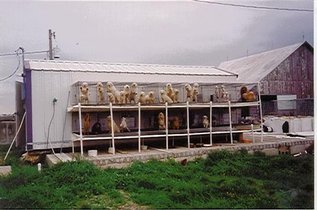 Lancaster County, Pennsylvania is the center of that state’s dog breeding industry and known notoriously for its history of puppy mills. As of Friday the county now has no full-time animal cruelty officer.

On Friday the Humane League of Lancaster County laid of one-third of its staff, including the last remaining cruelty officer Keith Mohler. Mohler had been with the Humane League for at least 18 years. The shelter eliminated 13 full-time positions in total. It is transitioning to becoming a “no kill” shelter and has also closed its doors to stray dogs.

“This is a tragic occurrence for animals in Lancaster County,” said Bob Baker, who has conducted numerous investigations for several groups in Lancaster over the past three decades. “I can’t think of another county in the state where animal abuse is so prevalent with hundreds of puppy mills, an active trade in horses destined for slaughter, a notorious livestock auction, and countless farms utilizing horses often inhumanely.”

A new group, the Lancaster SPCA, has set up temporary quarters and will open to the public this week. They will alleviate some of the problem by taking in stray animals. They have signed contracts to help provide care for the animals in several municipalities. The Humane League of Lancaster County spokeswoman Mary Wallick says they hope to hire a cruelty officer in the future depending on their budget, but there is no indication of when that would be. Until one if hired Wallick encourages residents to call 911 if they witness animal abuse.