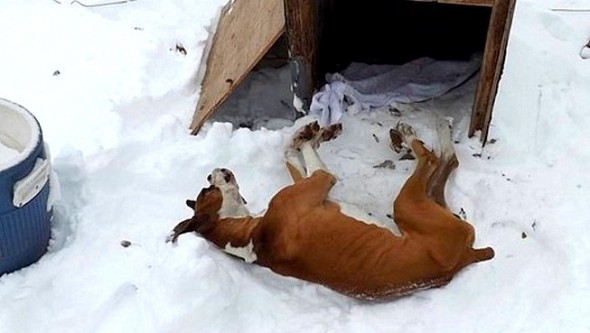 While many states mandate that pets are not allowed to be kept outdoors in extreme weather for extended periods of time without insulated housing, others barely consider hypothermic deaths to be animal cruelty.  Fortunately, some states and municipalities are now making harsher punishments for people who allow their pets to perish in the agonizing cold.

Montgomery County, Maryland has recently taken measures to ensure that dogs specifically will not be forced to endure the winter tethered outdoors.

“A person must not tether a dog under circumstances that endanger its health, safety, or well-being including: unattended tethering of the dog during a weather emergency,” said Thomas Koenig, Montgomery County Animal Services Division.

Pet owners will be slapped with a $500 fine for violating the ordinance.  The county’s police animal services are urging residents to protect all animals – including livestock – from frostbite and hypothermia.
WSIL-TV 3 Southern Illinois
In Illinois, an amendment was made to the Humane Care for Animal Act stating that “no owner of a dog or cat may expose the dog or cat in a manner that places the dog or cat in a life-threatening situation for a prolonged period of time in extreme heat or cold conditions.”

Prior to this, pet owners could be charged under an umbrella animal cruelty law, but this law specifically prohibits people from leaving pets in hot cars or out in the cold.

“We had laws for animal cruelty, of course, that we used in the past but it’s nice to have more options to address these types of situations,” Elgin Animal Control Officer Matt Ciesielczyk told the Chicago Tribune. “It’s nice to have another tool in our belt, as we say.” 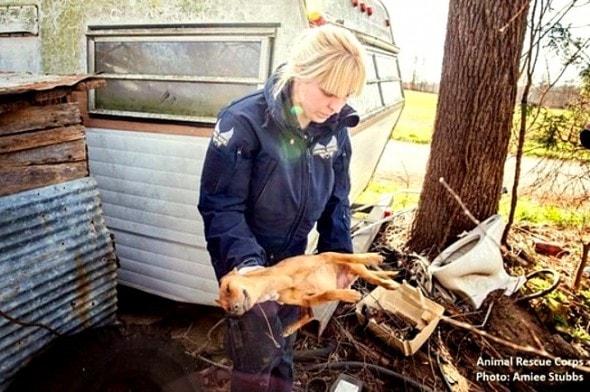 In 2014, the Elgin Police Department launched a campaigned called “Too Hot for Spot,” which was designed to keep pets from being left unattended in hot vehicles.  Fliers were put up to warn people that brain damage and death can occur in as little as 15 minutes.

“We saw a need several years ago and we tried to address it. We try to focus on prevention of it and not address after we find out about it,” Ciesielczyk said.

So just remember – if you see something, say something.  If you see a dog outside for hours with no insulated shelter, or if you hear a dog outside barking, howling, or crying for an extended period of time, call the police.  Cats are difficult to catch, and even when cold, are often too frightened to let people get them inside (especially ferals).  You can create shelters for outdoor cats using plastic totes, straw, and Styrofoam coolers. Shelters can be built for dogs using much larger totes.  You can also help by providing them with fresh food and water daily.  Dry food can be coated with lard or bacon grease to help keep dogs and cats plump enough to survive, especially if they don’t receive meals regularly. 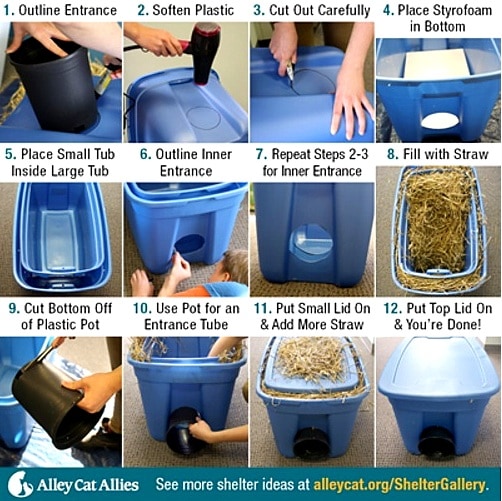 Remember to keep shelters high enough so they aren’t sitting in water or covered in snow – perhaps on an old table that cats can easily leap onto, and for dogs, a couple of pallets.  It’s better to cut two entrances so a cat can escape if another animal tries to enter the shelter.  Some cats won’t use the shelters if they think they’ll be trapped this way.  Dogs generally only need one entry.  Face the entrances away from the wind, and make sure to put something heavy – like a brick – on top of the shelter to keep it from blowing away.  For extra warmth, you can purchase a self-warming pad (that reflects body heat) here on Amazon.  They also offer them in larger sizes, so if you have a neighbor who refuses to bring their dog in, and local police won’t do anything about it, you can at least provide their dog with a bit of life-saving comfort. 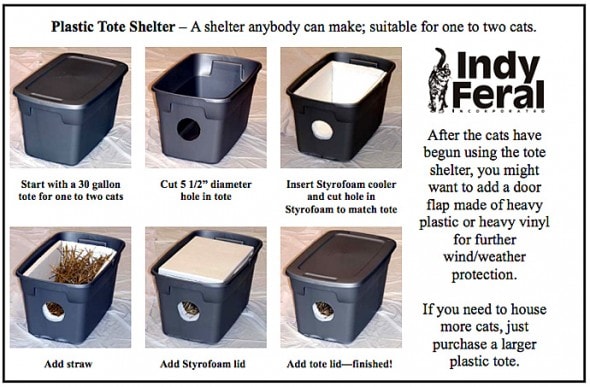