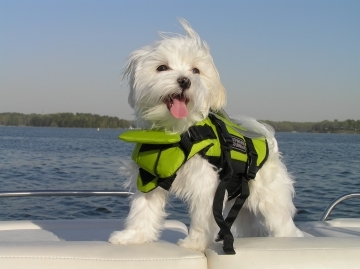 A new rule has been drafted by the Pet Animal Care Facilities Program stipulating that all dogs kept at daycare and kennels with pools must have life jackets.  It states that “every dog must wear a personal flotation device while in or while having access to a pool area whenever the pool water is deeper than the height of the dog at its shoulder.”  The new rule would also require the presence of at least one lifeguard at all times.

Some are not pleased with the concept.

“We have a park with a pool in it, and that means every dog that walks in our park would have to have a life jacket on.  This is extreme overreach with this proposed rule,” said Earthdog Denver owner James Bertini.  “That means buying dog-shaped life vests and hiring extra staff to monitor pool activity.”

But Kate Anderson, program manager for the Pet Animal Care Facilities Program, said nothing is written in stone yet.  The rules are still only in draft form, and no final decisions will be made until after there has been feedback from the public, as well as a public hearing.

She says it’s a discussion worth having, however, as there are documented cases of dogs drowning at doggie daycare centers in Colorado.  Sanitation would also be considered – the bottom of the pools would have to be “clearly visible” through the water.

“Our ultimate goal is to protect the animals in these facilities,” Anderson explained.  “Not every dog is a good swimmer.”

Although she does not care for animals without their owners’ present, and thus would not be affected by the new rule, Lori Beuerle agrees.  She owns the Canine & Conditioning Rehabilitation Group, which houses a large indoor pool for recreational doggie paddling.  Her company already provides life jackets to novice swimmers and breeds that just aren’t born swimmers.

“We make sure that every dog is comfortable with the water and knows how to swim before they are in here on their own,” Beuerle said.  “I’ve got Labs that won’t swim and Dachshunds that will – it all depends on the dog.”

Though the life jackets may soon be required in daycares in Colorado, it is not a bad idea to consider having them for home use.  Dozens of dogs die from drowning every year – even some of the most experienced swimmers.  Some life jackets are expensive, but many are available on Amazon.com for $15-30, depending on the size of your dog.